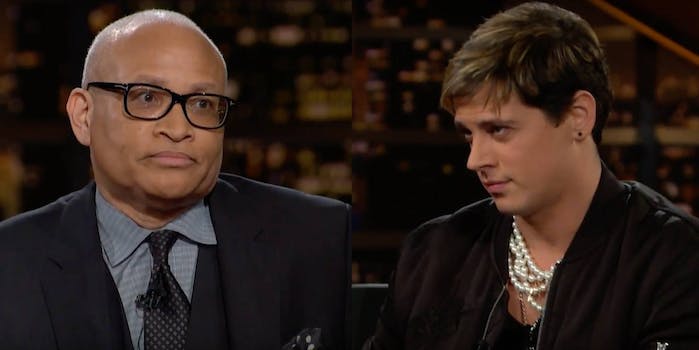 At least someone’s on Friday night’s episode of Real Time with Bill Maher called out alt-right agitator Milo Yiannopoulos on his hateful comments, even if Bill Maher insisted on letting Yiannopoulos slide.

During the episode’s roundtable with Yiannopoulos, Larry Wilmore, retired Navy Officer Malcolm Nance, and former Republican Georgia Rep. Jack Kingston, Maher asked Yiannopoulos why he singled out a trans student who had filed a discrimination complaint against the University of Wisconsin-Milwaukee while speaking at her school.

When Yiannopoulos, who is openly gay, began referring to the woman with the wrong pronouns and said she was a danger to women and children in bathrooms, Wilmore stepped in and compared Yiannopoulos’s treatment of transgender folks to arguments previously used to marginalize gay people.

“I just think it’s sad, because the same arguments that we use against gay people—treating them like aliens that just wanted to fuck anything that moved and that’s why we should avoid them at all costs—it’s being used …” Wilmore said before Yiannopoulos attempted to interject. “There’s a difference without distinction, because it’s using the same type of arguments.”

Yiannopoulos then made the argument that trans folks are statistically overwhelmingly involved in sex crimes—which is true, though he failed to mention that their “involvement” is as survivors of sex crimes—and said that being transgender is a “psychiatric disorder.” To which Wilmore reminded Yiannopoulos that being gay was once considered a disorder, too.

But Yiannopoulos continued to refute Wilmore’s challenges, including the idea that gay people’s acceptance of themselves has been largely influenced by society’s acceptance. After Yiannopoulos tussled with Nance, he asked Maher why he kept inviting “stupid” people, to which Wilmore snapped.

“You can go fuck yourself,” Wilmore interjected. “If your argument is that these people are stupid, you didn’t hear a word [Nance] said earlier in this segment, because he can talk circles around your pathetic, douchey little ass…”

“And one last thing, Leslie Jones is not ‘barely literate,'” Wilmore said to Yiannopoulos regarding a comment he made about the comedian last summer. Twitter banned Yiannopoulos after he continued attacking Jones.

“Go fuck yourself again for that one … She is a very thoughtful person and very funny,” Wilmore said.

Watch the full roundtable below: