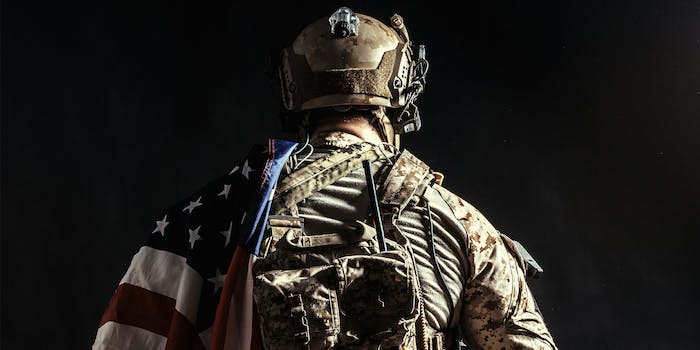 The unsettling connection between the military and white supremacy

Paramilitary discipline and tactics have been creeping into white supremacy and American extremist groups since the KKK first donned their white robes. But in the aftermath of the Unite the Right rally in Charlottesville, Virginia, last August, this reality has been brought into focus.

On Monday, the Daily Beast reported that Marine veteran Erik Sailors, the head of the Texas chapter of the white-supremacist group Patriot Front, is offering military-style training to members of the group as well as assisting in providing them with military-grade gear. Patriot Front members were present in Charlottesville last year, and the group has been contracted to provide security for white nationalist speaker Richard Spencer.

In fact, there are many Unite the Right faces that have military ties. James Alex Fields Jr., who allegedly drove a car through a group of protesters in Charlottesville, killing Heather Heyer, washed out of the Army. Before being charged with Heyer’s murder, Fields was photographed holding a shield bearing the logo of Vanguard America, a neo-Nazi group led by former Marine recruiter Dillon Ulysses Hopper.

In May, ProPublica also reported that several active-duty military members had participated in the Charlottesville demonstration. “Today cracked 3 skulls open with virtually no damage to myself,” Vasillios Pistolis wrote following the Unite the Right Rally. That day, Pistolis marched alongside the Atomwaffen Division, a secretive neo-Nazi group; on other days, he marches with the U.S. Marine Corp.

The list goes on. The Modesto Bee reported that Nathan Damigo, a 31-year-old Marine veteran taking classes at local Stanislaus State University, was a “key organizer” of the Unite the Right rally. Then there are the less-famous white nationalist rallies, like the “Confederate Memorial Day” one in North Carolina last year, where two then-Marines, Sgt. Michael Chesny and Staff Sgt. Joseph Manning, were arrested and charged with trespassing while hanging a white nationalist banner. Chesney was separated from the Marines this year; Manning is no longer in the service.

Indeed, there is an undeniable connection between the military and white supremacy—but where does this predilection come from?

The reports cited are careful to note that the white supremacists in military ranks is small in number, but significant in their organizational leadership of extremist groups. It is more accurate to say that ambitious white nationalists see the military as a tool than it is to say that the military creates white supremacists. Military service offers training for violence and an air of legitimacy, two essential components of a the white nationalist movement. As Joshua Beckett, a veteran associated with Atomwaffen who has encouraged neo-Nazi members to join the military, wrote in an online chat, “The US military gives great training…you learn how to fight, and survive.”

In other words, President Donald Trump’s rhetoric may have emboldened white supremacists to take a more public posture, but ties between the military and white supremacy date back well before the current administration. American Nazi Party leader George Lincoln Rockwell was a World War II Naval veteran. Aryan Nation leader Richard Butler was in the Army Air Corp. Oklahoma City bomber Timothy McVeigh was a Gulf War veteran. The Ku Klux Klan was founded by Confederate veterans, but a number of those vets were American soldiers before the outbreak of the Civil War.

If the leadership of the military chooses to ignore this history, then all the better for burgeoning “alt-right” leaders. One former Marine told ProPublica, “If neo-Nazis aren’t allowed to enlist in the military, and if nobody I know is a neo-Nazi, there must not be any within my unit” is the standard attitude of military brass. It’s easy not to see something if it is uncommon and it makes your organization look bad.

Some military leaders believe focusing on this small minority of soldiers is a distraction, but others have made condemning white supremacy a priority. (It should be noted that each branch of the armed forces has rules against participating in “extremist groups” that foster “racial, gender, or ethnic hatred or intolerance.”) An open accounting for this small but damaging group of infiltrators has also become a demand for some politicians and activists. Rep. Keith Ellison (D-Minn.) sent a letter to Defense Secretary James Mattis asking for information on extremist activities and “steps currently being taken to screen recruits for extremist ties.”

While the condemnations of white extremism from military brass have been a good step, clearly there is more to be done. If the armed forces continue to take the threat seriously, as they did with Chesny and Manning, perhaps the white supremacist element of the military will be rooted out. However, if they ignore evidence of white supremacy in their ranks, as they seem to have done in the case of Pistolis, then Joshua Beckett’s dream of making the military a training ground for hate groups may become a reality.