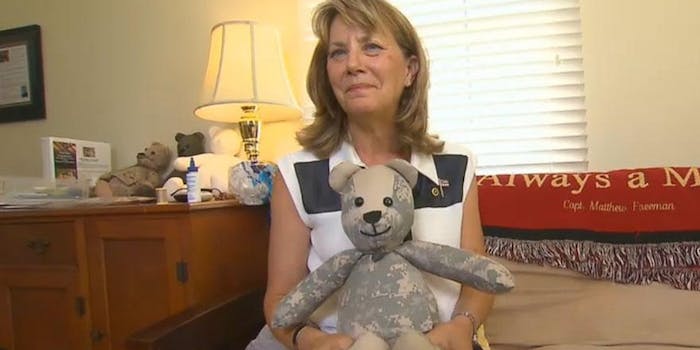 “I don’t know about big, but I think I’m making a difference."

Lisa Freeman lost her son, USMC Capt. Matthew Freeman, in 2009 after only nine days of deployment. Rather than wallow in grief, she found a way to not only give back, but also keep his memory alive, with the Matthew Freeman Project.

The 29-year-old Marine bravely elected to be deployed on the ground in Afghanistan, opting out of a relatively safe position as a Marine pilot earlier in the year. The dedication to his country and fellow Marines was inspiration for the beautiful legacy his mother has continued, collecting school supplies for children in war-torn countries and providing college scholarships for the siblings of fallen soldiers. The Matthew Bears are perhaps the most personal aspect of the philanthropy.

His mother lovingly handcrafts each of the Matthew Bears for the youngest members of military families—including children, nieces, and nephews—from the combat uniforms of their fallen loved ones.

“I don’t know about big, but I think I’m making a difference,” Freeman says as she prays over the uniform after each stitch. It’s a difference that can be felt in the warmth with which each child embraces their very own Matthew Bear.