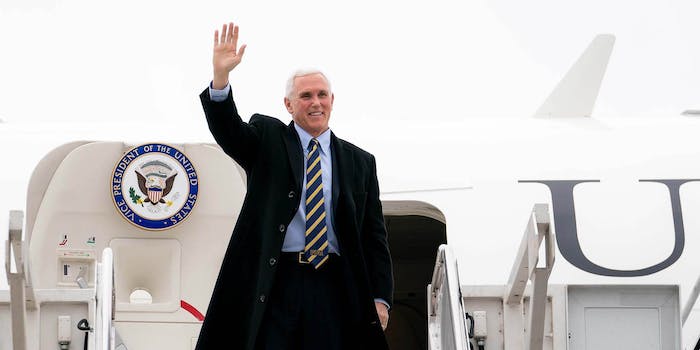 Mike Pence, who fueled HIV outbreak, is now in charge of coronavirus outbreak

Vice President Mike Pence has been tasked with overseeing the U.S. response to the coronavirus, leading many to point to a 2015 HIV outbreak blamed on the former governor’s policies.

The decision was announced Wednesday during a White House news conference, in which President Donald Trump pushed back against criticism of his administration’s response to the disease.

“Mike will be working with the professionals, doctors and everybody else that is working. The team is brilliant. I spent a lot of time with the team the last couple weeks,” Trump said. “But they are brilliant and we’re doing really well and Mike is going to be in charge and Mike will report back to me. But he has a certain talent for this.”

But the vice president’s alleged talent for combating outbreaks has been called into question given that Pence, during his time as Indiana governor, was accused of fueling the spread of HIV.

As detailed by HuffPost, public health spending cuts made by Pence in 2013 led to the closure of the only HIV testing center in Scott County.

To make matters worse, Pence opposed needle-exchanges as well, which allowed intravenous drug users to get clean needles in order to stop dirty needles from being shared.

Despite Pence’s moral stance, experts note that needle exchanges aren’t about endorsing drug use but about limiting the spread of blood-borne diseases.

Shortly after, needle sharing began to rise while those getting tested for HIV plummeted. And by 2015, a full-blown HIV outbreak was on the governor’s hands.

Even though as many as 20 new cases were being diagnosed a week at the outbreak’s height, Pence was reluctant to take the advice of health professionals.

Around three months after the outbreak was declared, Pence finally agreed to allow a temporary needle exchange in the county in an effort to clamp down on the spread of HIV.

Local health officials said at the time that the decision was instrumental in getting the outbreak under control.

The only question now is whether Pence will make similar mistakes in regard to the coronavirus by choosing his personal moral crusade over the advice of the nation’s leading health officials.