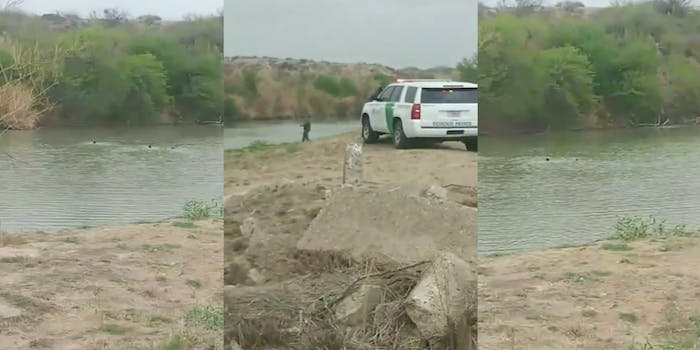 The fisherman who took the video used his fishing reel to try and save them after realizing the border patrol agents weren't going to help.

A video taken at the U.S.-Mexico border shows several migrants drowning as they attempted to cross the Rio Grande river. A fisherman who filmed the video was able to save one child.

In the video, which was taken by Jesus Vargas, at least three people can be seen in the water as several border patrol agents watch from the shoreline.

“You don’t have life jackets? Nothing?” Vargas shouts to the migrants before pleading with the nearby agents. “They’re drowning, those guys. The girl didn’t come up no more. Call the boat, man.”

Vargas used his fishing reel to try and save them after realizing the border patrol agents weren’t going to help, according to a local TV station that spoke with Vargas. He was able to rescue a boy, who Vargas believes is about 13 years old.

Vargas says he saw at least three other people drowning, two teenagers and one woman, and believes they are all deceased. However, the U.S. Border Patrol Laredo Sector said in a Facebook post that two people drowned in the river after Border Patrol agents “foiled a human smuggling attempt.”

Webb County Sheriff Martin Cuellar, who is also the brother of Rep. Henry Cuellar (D-Texas), said the incident highlights a need for change. “We need to have the proper protocols on where [migrants] can come in and apply and do all that, instead of coming in through the river doing it the way they are,” Cuellar said.