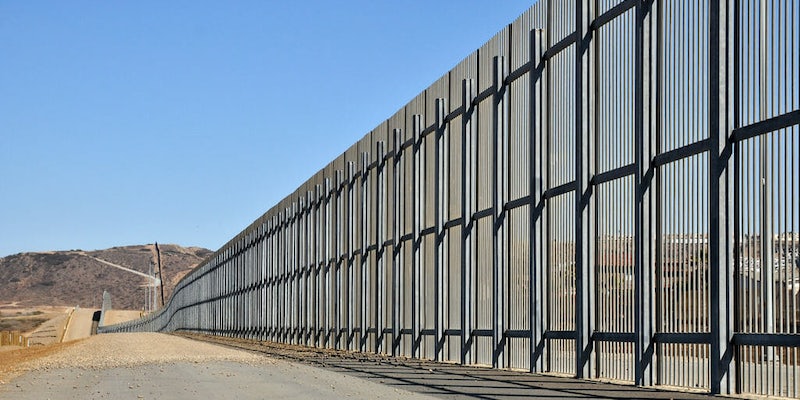 This is a humanitarian crisis of Trump's own making.

Ever since I saw the photos of people being tear-gassed as they attempted to cross the U.S.-Mexico border in November, it felt like I’d been holding onto a lump of hot coal. It wasn’t until I reached Tijuana in December could I release that tension. No longer was I observing the events on the ground from a laptop or phone screen. I could be there to understand and grapple with the atrocities myself, without another person’s analysis. Here, in plain sight, was evidence that Donald Trump wanted to ruin the lives of vulnerable people.

What Trump and his administration have been calling an “immigration crisis,” a great many of us have seen as a humanitarian crisis. Trump’s drummed-up hysteria reached a peak on Friday when he declared building a border wall cause for a “national emergency.” “It’s a great thing to do,” he said of building the wall and executing his power, “because we have an invasion of drugs, gangs, people, and it’s unacceptable.”

His statement distills the core, political catalyst for how Trump, a man who built an empire with his father’s money and through exploiting poor, undocumented people, became president: Fear-mongering over the illusion that Black and Brown people are coming to destroy America. As far back as 2011, Trump has perpetuated the notion of an immigration crisis: spreading rumors about former President Barack Obama’s birth country, announcing his presidential candidacy with a speech where he referred to Mexican immigrants as “rapists,” or reportedly calling Haiti one of many “shithole nations.” Even in his declaration of a national emergency, Trump reliably referred to the migrant caravan as “monstrous.”

In fact, Trump has often used ominous “migrant caravans” to incite fear and fire up voters. Just before the midterm elections, Trump centered much of his energy around admonishing an oncoming migrant caravan, even tweeting that they are “a disgrace to the Democratic Party,” which made no sense since asylum seekers are not coming to America to spite Republicans. Regardless, the migrant caravan became the focus of many of Trump’s talking points, which of course media outlets picked up, making it seem like the caravan was a possible threat; Trump even made a racist ad about it. To many, Trump’s fixation on the migrant caravan is just another tool for him to spark fear and mobilize the support of conservatives.

The Caravans are a disgrace to the Democrat Party. Change the immigration laws NOW!

However, I was in Tijuana a month after the elections, helping migrants from this caravan, and I didn’t see any gang members or drug dealers. In fact, many of the families I worked with, alongside a legal team that prepared them for the strenuous asylum-seeking process, were attempting to flee gang territories in their home countries. They had little or no possessions, other than necessary legal documentation and the clothes on their backs. The caravan also included unaccompanied minors and LGBTQIA migrants. Above all else, the volunteers and I learned firsthand that President Trump does not care the least about legal immigration because he has had made the process as difficult as possible.

In fact, of the roughly 5,000 migrants who arrived in Tijuana in hopes of seeking asylum last December, many have been displaced in various shelters around the Tijuana area, have applied for humanitarian visas in Mexico, or have decided to return to their home countries. This makes it difficult to fully grasp how many migrants the November caravan have been able to successfully seek asylum or even begin the process. It also does not change the conditions that have forced many of them to flee, and it does not curb the determination of oncoming caravans.

During his declaration of a national emergency, President Trump neglected to mention the policies that his administration has put in place that has made it so hard for migrants to seek asylum and even live humanely: the large camps haphazardly orchestrated to imprison migrant children, the administration refusing to allow asylum seekers to stay in the United States while their asylum case is being processed, and the United States’ role in implementing “The List.”

I first learned of “The List” upon arriving in Tijuana. The List is a physical notebook that asylum seekers have their names added to in order to begin the asylum process. Migrants must arrive at El Chaparral Plaza near the border in Tijuana, wait in line, and give their name to one of the List’s migrant organizers. In return, they get a number. Each number represents 10 migrants. Once a migrant’s number is called, they must be present at the plaza to officially begin to the asylum process, but the wait to have one’s number called could be weeks or months. Allegedly, the List is a migrant-led initiative with the help Grupos Beta, a service from the National Institute of Migration of Mexico. But during my time in Tijuana, I learned many considered it a product of Trump’s rhetoric and his administration’s refusal to process more than 30 to 60 asylum seekers a day. As an attorney at the border said, border patrol has used it as “an exception to the law to create a baseline confusion about rules, rights, procedures, and authorities.”

Ultimately, Trump’s foundational justifications for this emergency wall—the notion that drug-dealing, human-trafficking immigrants are flooding drugs into the country through the southern border—are false. It has been proven by U.S. Border Patrol and Customs statistics that most drugs that enter the United States through the southern border are through legal entry at a border port. The supposed influx of crime in border towns or violent acts committed by alleged illegal immigrants is another reason Trump felt compelled to call a national emergency. He even claimed that El Paso, Texas, benefited drastically from the 2006 construction of a border wall along the state and California. However, Congresswoman Veronica Escobar of Texas disputed many of these claims about El Paso and published a letter demanding Trump’s apology.

Trump has built a crisis, like so many other politicians, from lies. They are lies he tells to rile up his base, and they are lies that not everyone can dismantle—the 39.7 million Americans who live in poverty may not have easy access to information, nor the time, to Google the president’s every word. For those of us who can, it should be our job to first call out Trump for the crisis he created, then to do the necessary work to undo the devastation of his rhetoric and policies.

While in Tijuana, I was able to contextualize the networks of support that must materialize when governments fail the most vulnerable. I played with the children of migrants who laughed at my Spanish and I helped sort medical supplies for deportees from the United States. But there were also much darker moments for which support and justice seem vital: During legal meetings, I learned of the normalcy of sexual assault in Barretal, a state-run shelter. Just weeks before I’d arrived, three LGBTQIA migrants were lured out of a safehouse, attacked, and two were killed in an alleged attempted robbery.

It must become our task as human beings to care about the plight of others who may or may not look like us. If we do this, we may hope to see a future that understands the value of human life beyond borders and citizenship.