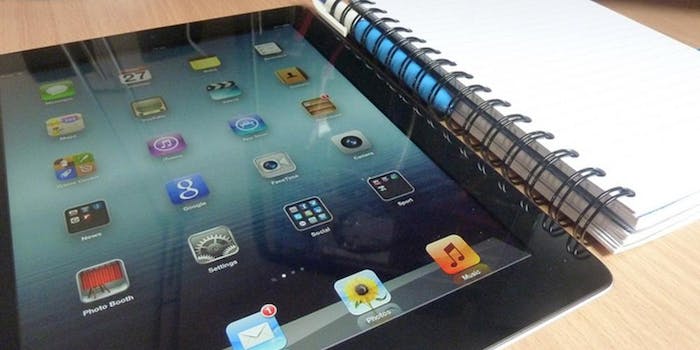 An Oregon mom named Sarah, however, apparently wasn’t that familiar with this rule. So when she discovered that her 12-year-old daughter had been using her school-supplied iPad to read erotica on the online writing community Wattpad, she said she was “shocked.”

“It was not something you expect a 12-year-old to look at, or to talk about, or to want to do or anything,” Sarah told the local news channel KATU. “She’s still a little girl.” After discovering that other students in her daughter’s classroom had also accessed the website, Sarah is urging her daughter’s school to issue tighter security restrictions for their iPads.

According to a KATU report, Sarah’s daughter was given an iPad last year as part of a pilot program at Neil Armstrong Middle School. Although she says she monitored her daughter’s online activity and didn’t allow her to access the iPad after school hours, Sarah discovered she had been reading adults-only content on Wattpad after going through her daughter’s browser history.

After grounding her daughter and bringing the security breach to the school’s attention, Sarah thought the incident was settled. But one month later, she discovered that her daughter had set up an unauthorized Gmail account on the iPad, “and was sending pictures of herself and having relations online,” Sarah told KATU.

Rather than viewing the second security breach as an opportunity to teach her daughter a lesson about online safety, or even to have an open, honest discussion about sex, Sarah responded by permanently confiscating her daughter’s iPad, forcing her to go “electronics-free” for the next seven months of the school year. Now, she’s rallying for Neil Armstrong Middle School to tighten their restrictions on the content students can access online, so no other parent can endure the nightmare of finding out their pre-teen child is curious about sex ever again.

In a statement to KATU, Neil Armstrong Middle School principal Brandon Hundley said the school had implemented a kid-friendly mobile device management system to prevent students from accessing any naughty content when it launched the iPad pilot program last year. But a KATU investigation found that some students breached the system to access Facebook, Snapchat, and Instagram, which allegedly led to one student being cyber-bullied.

While Hundley denied knowledge of cyberbullying at the middle school, he did issue the following statement in response to the Wattpad erotica allegations:

There is no way to ensure absolute security on a technology device. As we develop our program as others schools are doing the same, we will continue to focus on teaching and training our students in the appropriate ways to use technology to support their learning, keep themselves safe and leave as small and limited a digital footprint as possible.

Phew. Hear that, parents? The school’s taking care of this. They’re blocking the naked ladies and bad sex things online, so your kids won’t see or think about them ever again. Which means they’ll stay virgins forever, and you’ll never have to sit down with them for that awkward, yet absolutely essential, conversation about sex and online safety. What a relief. Free, erotica-less iPads for all!