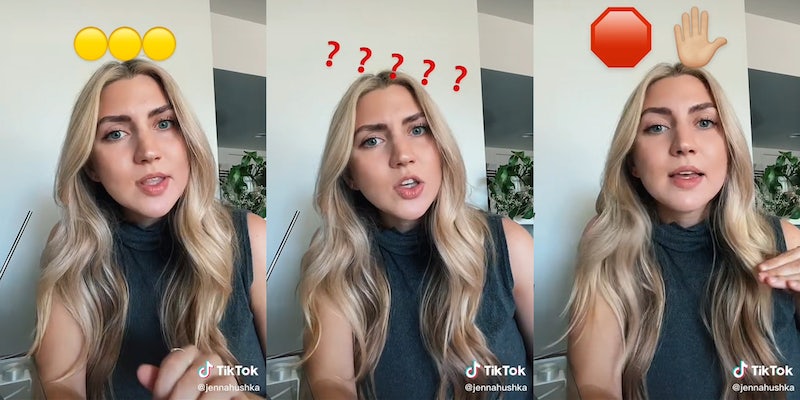 ‘I swear Teams is trying to get me fired’: Worker rants about Microsoft Teams setting her activity status to ‘yellow’ without her consent

'I go yellow when I’m on Zoom calls. I am actively working, Teams!'

A woman on TikTok says Microsoft Teams needs to stop automatically setting her activity status to “Away” when she steps away from her computer just to get water.

The woman, a corporate worker named Jenna (@jennahushka), posted a rant about Microsoft Teams on TikTok. As of Tuesday, the video garnered about 118,000 views on TikTok.

“So what does that mean? That means that the person that messaged you saw your activity status as yellow — and what do you think they thought?” Jenna continues in the video. “Do you think that they thought you were getting some water to hydrate yourself to be your best version while you work from home? No. They’re like, ‘why is this person on yellow? What are they doing? Slacking.'”

The TikToker sounds aggravated by Microsoft Teams updating her activity status without her consent as she passionately continues her rant.

“I go yellow when I’m on Zoom calls. I am actively working, Teams!” one viewer commented.

“My activity status will go yellow if I have Teams minimized and it’s the worst,” a second viewer commented.

A third wrote, “No because I swear it goes yellow in like two minutes.”

In reply to the comment, Jenna wrote, “Literally 30 seconds I’m like OKAY I JUST NEEDED TO WATCH A FEW TIKTOK VIDEOS OK SUE ME.”

“It goes yellow so fast now. It used to stay on green for a long time, once I went to get a curbside order at target came back and it was still green,” someone else wrote.

This isn’t the first time a TikToker’s frustration with Microsoft Teams has gone viral. Other users have similarly ranted about the application and its tendency to make it seem like the user is not working at their desk. According to Microsoft Teams, the “yellow” status symbol automatically occurs whenever the computer has been “idle” or enters sleep mode. If the application is running in the background while you use another program, your status automatically switches to “away” after five minutes.

However, some TikTok users had suggestions for how to hack the activity status.

“Join a meeting with yourself….put your status to green. it will stay green all day and keep your computer logged in,” one user suggested.

“Open a blank PowerPoint, put in in present mode. it will stay green,” another user commented.

“I just schedule meetings with myself so it goes red,” one viewer shared.