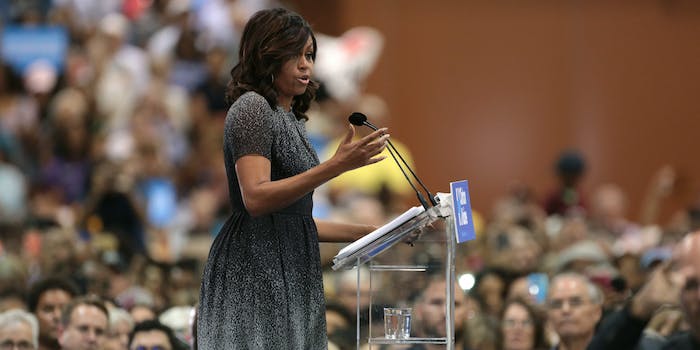 Look for it in the fall.

The Obama administration may be over, but former First Lady Michelle Obama has only begun to share her story. Her memoir, Becoming, has been officially revealed and will hit store shelves on Nov. 13.

Becoming is billed as a “work of deep reflection and mesmerizing storytelling” that follows Obama “from her childhood on the South Side of Chicago to her years as an executive balancing the demands of motherhood and work, to her time spent at the world’s most famous address.” The book’s publisher, Penguin Random House, promises the memoir will feature stories “both public and private” that portray Obama’s successes and failures over the years, too.

“Warm, wise, and revelatory, Becoming is the deeply personal reckoning of a woman of soul and substance who has steadily defied expectations—and whose story inspires us to do the same,” the book’s official website states.

News first came out last March that both Obama and her husband, former President Barack Obama, signed deals to publish memoirs with Penguin Random House after the company bid over $60 million for the opportunity. Previously, the highest bid for a memoir was $15 million for President Bill Clinton’s My Life, which was published in 2004.