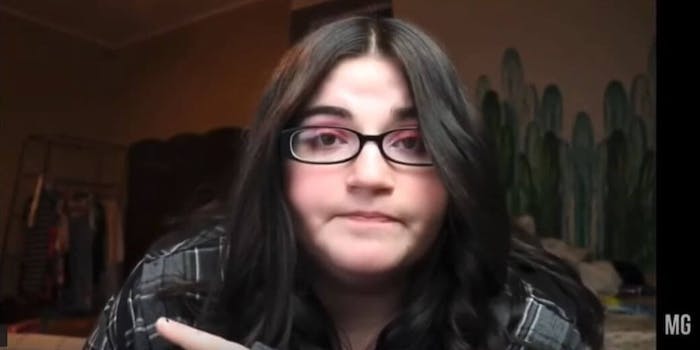 The vlogging community is livid at the scenario she described.

A YouTuber named Michelle Grace said she beat her 2-year-old daughter for ruining a pair of makeup palettes, and the vlogging community, led by Phillip DeFranco, was livid at the scenario she described.

In her now-deleted video, which has since popped up in other places on the platform, Michelle Grace complained that her daughter ruined her makeup and that “I just beat the crap out of her” in response.

In the video, you can hear a child wailing in the background, and Michelle Grace said, “Y’all hear that, right? My 2-year-old just got her ass beat because no matter how many times I tell her not to mess with my makeup, she never fucking listens. I put it away to where she can’t find it, and what does she do? She finds it. At this point, I need a fricking safe with a combination on it to keep her out of it. She has ruined two palettes of mine, and one of them is being discontinued.”

Michelle Grace then complained that her hand hurts because “I just beat the crap out of her.” She proclaimed that she normally doesn’t spank her child—aside from the occasional “pop”—but that “I’ll be damned if she’s going to walk all over me.”

She also described a moment in the middle of the night when her daughter procured some Windex and sprayed it all over the child’s bedding, her crib, and a James Charles palette. The YouTuber was also enraged that her daughter ruined one of her Jeffree Starr palettes, one that was being discontinued and one that the YouTuber couldn’t afford to buy again. She also described how her palettes are like her children and that she’ll protect them with her life.

“I had to beat some toddler ass tonight,” said Michelle Grace, who has about 900 subscribers and who writes in her YouTube description that “I’m 22 years old and a single mother of a beautiful baby girl.”

A YouTuber named Laura Edson wrote, “Wow, I am at disbelief for words. It is so disheartening what happened to this poor little innocent baby. The world is such a cruel place sometimes. I can only hope this baby gets the justice she deserves.”