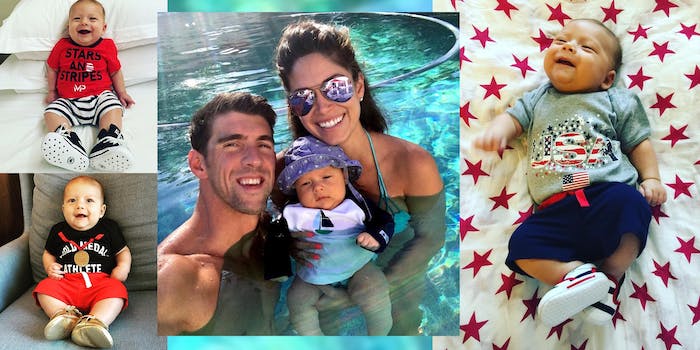 Boomer, son of Michael Phelps, is the baby to watch in the Olympic cuteness category

He's the guy with the tiniest gold medals and on-point facial expressions.

The 2016 summer Olympic games in Rio feature the world’s most accomplished athletes competing in the toughest matches—but Boomer Phelps easily won the gold medal for cuteness without even trying.

Boomer, 3 months, is a baby. A teeny tiny baby whose dad is the greatest swimmer of all time (Michael Phelps) and whose mom (Nicole Johnson, a pageant queen who placed in the top 10 for Miss USA) brought him to the games in the most ridiculously adorable patriotic gear to watch Dad win gold on Sunday.

I'm only here for excessive amounts of cuts to Boomer Phelps reactions. pic.twitter.com/hnZxusbN3N

The stars-and-stripes baby carrier with the initials “MP” stenciled across the front made baby Boomer (yes, we know) the star of Sunday’s broadcast. Johnson even strapped a pair of patriotic baby headphones onto Boomer’s tiny head to protect his hearing from all the roars of victory.

But flag-bearing fashion wasn’t the only thing that kept the public enamored with Boomer on Sunday—his scrunchy, cranky baby faces became a meme that fans used to project their own emotional states.

Aside from nearly distracting the entire Olympics away from Sunday’s glorious winning freestyle relay, Boomer is also an Instagram star. Why, you ask? Because that’s where you find photos of little Boomer decked out in obscenely cute Olympics-themed outfits, like this onesie with the flag and Olympic rings.

Michael Phelps takes to the water again on Monday, Wednesday, and Thursday this week. That means three more opportunities to watch the cameras cut away to Boomer, three more highly anticipated baby outfits, and oh, yeah—probably some medals or something in some contest that our suddenly raging hormones already made us forget.