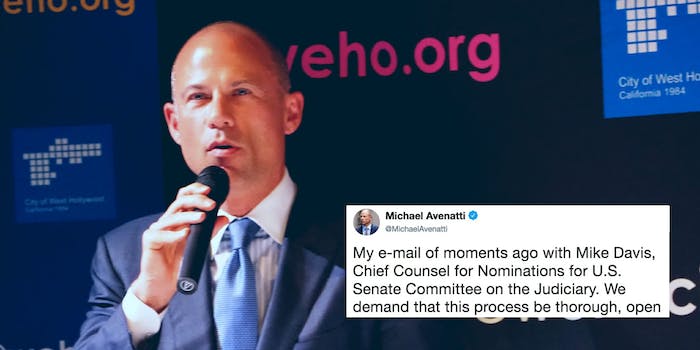 Meanwhile, investigators are looking into a possible fourth woman's claims.

The attorney representing Stormy Daniels in her lawsuits against President Donald Trump says he now represents a woman willing to testify against Brett Kavanaugh regarding multiple 1980s parties in D.C. where multiple men plied women with drugs and alcohol before taking turns assaulting them.

On Twitter on Sunday, Michael Avenatti tweeted that he represents a woman with “credible information” regarding Kavanaugh, President Trump’s Supreme Court nominee currently being questioned by the Senate Judiciary Committee, and Mark Judge, a friend of Kavanaugh’s who Christine Blasey Ford said assisted in her attempted assault by Kavanaugh when they were in high school.

I represent a woman with credible information regarding Judge Kavanaugh and Mark Judge. We will be demanding the opportunity to present testimony to the committee and will likewise be demanding that Judge and others be subpoenaed to testify. The nomination must be withdrawn.

Avenatti stated that he will be demanding a chance to testify in front of the judiciary committee, and for Judge and others be subpoenaed to testify as well. Avenatti went on the clarify that his client isn’t Deborah Ramirez, a Yale classmate of Kavanaugh’s who told the New Yorker that Kavanaugh had exposed his penis to her during a college party. Ramirez and Ford have both called for the FBI to investigate their claims against Kavanaugh, as has Avenatti’s client. Kavanaugh has denied both Ford’s and Ramirez’s claims.

Hours later, Avenatti tweeted a screenshot of an email exchange with Mike Davis, the chief counsel for nominations for the Senate Judiciary Committee. In the email exchange, Davis asked Avenatti to advise the committee of the information “immediately” so Senate investigators can begin looking into it.

Avenatti then detailed the allegations, writing that “we are aware of significant evidence of multiple house parties in the Washington, D.C., area during the early 1980s.” Avenatti wrote that Kavanaugh, Judge, and others would “participate in the targeting of women with alcohol/drugs in order to allow a ‘train’ of men to subesquently gang rape them.” Avenatti wrote that there are “multiple witnesses” to corroborate facts.

Avenatti also advised the committee to ask Kavanaugh questions about targeting women for sex or rape; attending parties at which women were assaulted by multiple men; witnessing lines of men outside bedrooms at parties understood to be waiting for their turn to assault a woman; participating in “sexual conduct” with women while they were intoxicated; or stopping assaults at such parties from happening.

My e-mail of moments ago with Mike Davis, Chief Counsel for Nominations for U.S. Senate Committee on the Judiciary. We demand that this process be thorough, open and fair, which is what the American public deserves. It must not be rushed and evidence/witnesses must not be hidden. pic.twitter.com/11XLZJBTtY

In later tweets, Avenatti wrote that Davis appeared to take issue with the email being shared on Twitter, and on Monday morning, shared a follow-up email to Davis, detailing his and his client’s questions and demands regarding the investigation into the allegations against Kavanaugh.

My e-mail of this morning directed to Mr. Davis, Chief Counsel for Nominations for the U.S. Senate Judiciary Committee. The American people deserve to know the truth and evidence regarding the allegations. There must be no effort made to avoid it. pic.twitter.com/8pcdW0PqQ1

Additionally, investigators in Montgomery County, Maryland, confirmed they are looking into a second sexual assault complaint against Kavanaugh that likely occurred during his time in high school. An anonymous witness came forward this weekend, according to the Sentinel, but investigators haven’t released any specific information at this time. With Ford, Ramirez, and Avenatti’s client, this complaint would bring the total to four women who say they have evidence against Kavanaugh regarding assault.

Ford is scheduled to testify against Kavanaugh on Thursday.