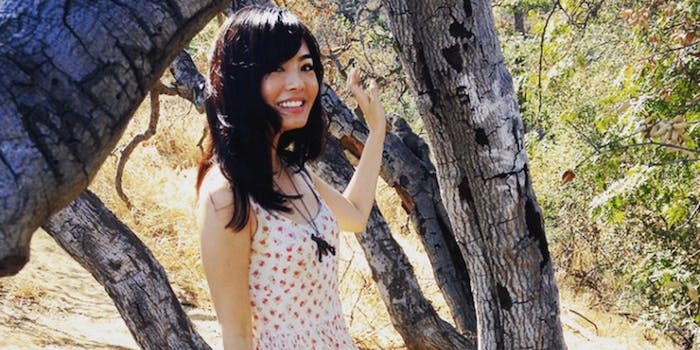 Some of these messages are not to be believed.

Violinist Mia Matsumiya has been called a “skank” by a stranger. She’s been called a “disgusting Japanese slut.” She’s been told to “abort whatever son you have.” Matsumiya has been receiving these types of racist, sexually inappropriate, and threatening messages online for nearly 15 years, and she’s finally going public with them on her new Instagram account, @perv_magnet.

In an interview with New Zealand’s 3 News, Matsumiya explained that she has been receiving creepy messages online since the early 2000s when she began blogging. “The first one I ever saved was from a guy who had a fantasy of being roasted on a spit alive on a deserted island, and then cannibalized, which is the worst idea ever,” she recalled. “I saved it because holy shit, I found it so disturbing and strange.”

The messages became even more pervasive in 2003, when she joined the band Kayo Dot and began actively promoting her work as a musician on Myspace.

Have I just been really unlucky or have I never seen a well-intentioned question that contains the phrase "virgin flesh?"

Matsumiya launched @perv_magnet in September. Since then, the account has garnered over 32,000 followers.

Over the last 10 years, I've archived over 1000 messages from stalkers, pervs & crazies, & decided to post them all: https://t.co/51YUki4Zgu

The responses to @perv_magnet have largely been positive, though some men appear baffled by the degree of harassment Matsumiya has endured.

@mia_matsumiya you are amazing! Its so great that you have taken such a strong stance against internet bullying and harassment #pervmagnet

Reading the #pervmagnet tweets and just stunned, flabbergasted that people have so little self-awareness.

check out the Perv_Magnet project from @mia_matsumiya. what a great 'out' about online harassment. #pervmagnet

Though Matsumiya is appreciative of the support she has received, she is more interested in creating a safe space for women to address the rampant sexism that they encounter online.

“Personally, I don’t know any woman who hasn’t been the recipient of creepy behavior,” she told Dazed Digital. “I want my account to be a place where women can commiserate and men to just learn what women can experience online. I don’t know yet what can be done about it but I feel like the first step is definitely to shed light on the issue.”