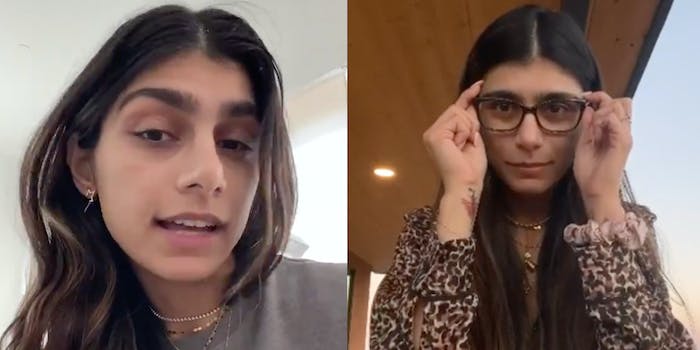 Mia Khalifa is donating $100,000 of her OnlyFans earnings to Beirut

'I promised them that money, and I was going to get it to them one way or another.'

Mia Khalifa is apparently crushing it with her newly created OnlyFans account, as she is donating $100,000 of her earnings to Lebanon following the devastating explosion in its capital, Beirut.

Khalifa announced her intent to donate $100,000 to Lebanon in early August. Initially, she aimed to earn the money through the sale of her “infamous” glasses, but several attempts to sell them on eBay were unsuccessful. Instead, she decided to front the bill herself, shelling out the impressive donation from her OnlyFans income.

Since OnlyFans launched in 2016, it has boasted a loyal fan following. This year has seen the adult content platform reach new heights, however, as a number of notable celebrities and well-known creators gravitated toward the service. While the sex workers who make the platform what it is take issue with a number of these celebrity latecomers—looking at you, Bella Thorne—Khalifa might make a few friends with her latest decision.

Khalifa announced her intent to use her OnlyFans contributions to aid Lebanon in a TikTok, which has been shared across social media. In the TikTok, Khalifa explains her unsuccessful attempt to sell her glasses on eBay.

“We went through eight bidders, none of them worked out,” she says in the video. “So I decided to pull the glasses off eBay and hold onto them.” She hopes to eventually sell them for charity.

“I’ve also decided to donate $100,000 of my own money to the Lebanese Red Cross,” Khalifa explains. “I promised them that money, and I was going to get it to them one way or another.”

“I just want to thank everyone who has supported me on OnlyFans, because I would not be able to make this donation to Lebanon without you guys,” she continues. “I’m forever grateful. Thank you so much. I love you guys.”