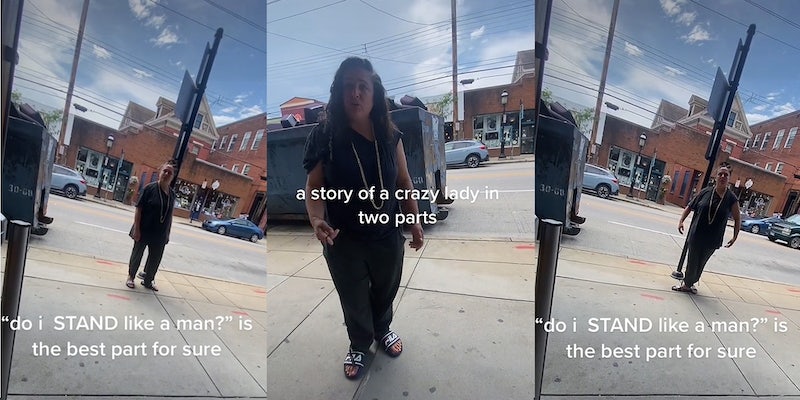 ‘F*ck you, you millennial b*tch. I’m a female’: ‘Karen’ claims Mexican restaurant served her cat meat, gets arrested after causing a scene

A video showing a woman in Cincinnati allegedly accusing a Mexican restaurant of serving her cat meat and then yelling at workers before getting arrested has gone viral on TikTok.

In the video of the two-part series, a woman asks if the user, Iris (@iriskessler), is recording. She denies that she is, which the woman (who is later identified as Ariel) seems to approve. Ariel then instructs Iris to “call 911.” Iris then tells her that they are already on their way.

The video then cuts to her being arrested. Part one currently has over 456,000 views.

In part two, which appears to have been recorded before part one, Ariel and Iris can be heard having a particularly incendiary conversation.

“Do you have a vagina?” Ariel asks.

Iris and presumably her co-workers then say amongst themselves that it’s a weird thing to ask.

“You’re the one asking me what gender I am,” Ariel states.

Iris denies this. Ariel then says that Iris had previously asked for her pronouns. In both this video and a follow-up, Iris denies that she ever asked such a question.

After a bit more back-and-forth, Ariel asks, “Do I look like a man?”

“I don’t know what you look like!” Iris answers.

“Do I sound like a man?” Ariel continues, apparently putting on a weak Scottish accent.

“Do I stand like a man?” Ariel finally says.

At this point, Ariel strikes what many viewers called a third-position ballerina pose.

“Oh. Then I guess no,” Iris concludes.

This clip has almost five million views and prompted Iris to later post several videos explaining the context of what happened. She also posted a longer version of the viral video with more context on Twitter.

In summary, Iris states that, though the woman appeared to potentially be having a mental health episode, she was saying things that made both Iris and customers at a nearby restaurant feel unsafe.

First, she accused a local Mexican restaurant of serving cat meat instead of chicken.

“I don’t think they really served her cat meat,” Iris explains in the video. “I don’t even know where you can get that. It sounds easier to get chicken at that point.”

In the comments, she elaborates as to why the lady was so sure she had consumed cat meat.

“She claimed she could taste ‘the iron from cat blood’ which confused me even more,” Iris wrote. “has she HAD CAT BEFORE?”

In one of the clips, Iris and her friends ask the woman to leave, blocking their door so she cannot enter.

Ariel does not leave. She also begins using homophobic insults and slurs against Iris and the others.

Iris clarifies in a later video that she is a cisgendered woman and assumes that Ariel defaulted to these insults as “[they] all looked very gay.”

In the comments section, viewers made jokes about the situation.

“This is the intro scene to a Shakespeare play,” one user wrote.

“You were so quick with your responses i love it,” added another.

The Daily Dot has reached out to Iris via Instagram direct message.