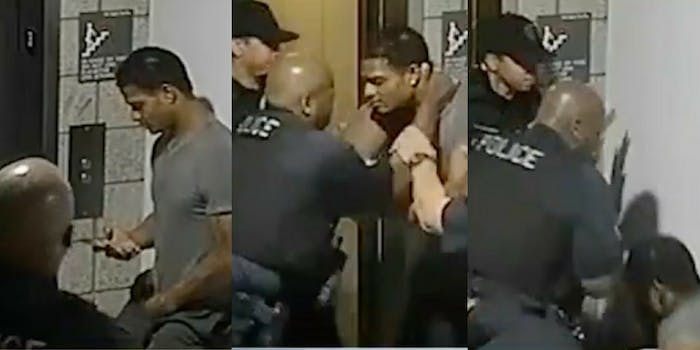 The officers knocked the man out before handcuffing him and zip-tying his feet.

Four Mesa, Arizona, officers are on leave after the police chief received a video of the men violently beating a Black man in his apartment complex.

According to Mesa Police Chief Ramon Batista, a member of the community, Pastor Andre Miller, sent him footage of the altercation from an apartment complex’s surveillance camera. The video, recorded on May 23, shows a man identified as 33-year-old Robert Johnson standing against a railing in his apartment building and talking on the phone. Another man in the video, Erick Reyes, identified as a friend Johnson was assisting at the time of the incident, is sitting against a wall and talking to an officer. An elevator door opens to reveal more cops, who then frisk Johnson. He was unarmed.

The officers then ask Johnson to move away from the rail to the wall behind him and sit down. Johnson moves to the wall and leans against it while using his phone. Four officers swarm him and grab his body, shoving him against the wall and punching him repeatedly. Johnson appears to pass out from the blows and falls to the ground before police drag him, handcuff him, and zip-tie his feet. According to AZ Central, the video also shows a different officer shoving Johnson’s head into an elevator door.

According to Batista, Johnson didn’t follow the cops’ orders to sit, but Batista admitted that the officers involved used unnecessary force. Batista released the video to the public as well.

“I didn’t know anything about this, and the way I learned about this is because a member of the community sent me the video and said, ‘Hey, this looks very alarming, and I need you to look at it,'” Batista told KSAZ. “I examined it, and I immediately opened up an investigation.”

The Mesa police department has placed the unidentified three officers and one sergeant on administrative leave and is investigating the incident.

In the past year, Mesa police have faced criticism for excessive use of force in two other incidents. One involved an 84-year-old grandmother who had been taken down by police officers when police originally said the woman slipped. And in December, after Officer Phillip Brailsford was acquitted of second-degree murder, unedited footage of the shooting showed Brailsford fatally shooting the man as he kneeled, crying, begging for his life.

“He’s doing terribly,” Taylor told BuzzFeed News. “He did not deserve the beating he took from that many officers. Mesa police have a culture of hurting and shooting and killing people and this is just another incident that shows how badly this department needs to be cleaned up.”