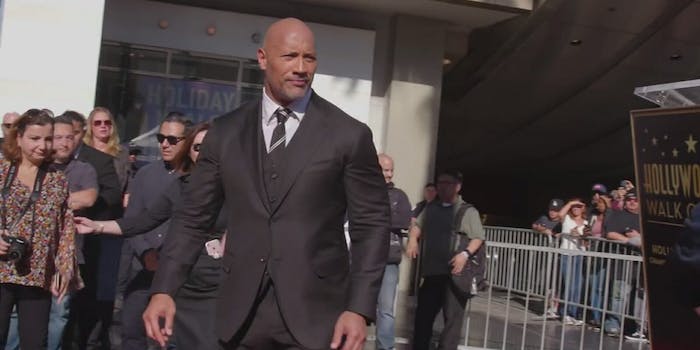 Nope, this is definitely not an empty, performative gesture.

Don’t worry ladies, your knights in shining armor have arrived. Men are wearing black to the Golden Globes to protest pervasive sexual harassment in the film industry, and the public is scratching their heads as to why men would think this action is worth much significance.

Earlier this month, women across Hollywood vowed to wear black at next month’s Golden Globes in protest against sexual misconduct in the film and TV industries. For women, black attire is likely to stand out, as many actresses tend to wear lighter and brighter colors for the red carpet. It’s not only a solemn fashion choice—the dark color also draws attention to the sexual harassment culture that’s impeded women’s careers in Hollywood, with dozens of men like Louis C.K., Kevin Spacey, and Harvey Weinstein being called out for sexual misconduct in the past few months.

Recently, men have agreed to join in the black award-show attire, too. Stylist Ilaria Urbinanti turned to Instagram late last week, stating that the men she is styling for the awards show will be wearing black, which Dwayne “the Rock” Johnson later confirmed in the comments.

“Because everyone keeps asking me… YES, the men WILL be standing in solidarity with women on this wearing-all-black movement to protest against gender inequality at this year’s Golden Globes,” she wrote in a post from Dec. 22. “At least ALL MY GUYS will be.”

“We are working hard to get in more all-black options to support those who are adhering to the Golden Globes consensus,” he said according to the Hollywood Reporter. “It’s going to be an inevitable thing out of solidarity. I think the majority of men are going go safe in a black suit with a white shirt so no one’s going to look the odd man out.”

Because everyone keeps asking me… YES, the men WILL be standing in solidarity with women on this wearing-all-black movement to protest against gender inequality at this year’s Golden Globes. At least ALL MY GUYS will be. Safe to say this may not be the right time to choose to be the odd man out here… just sayin…

In theory, men joining in the protest sounds like a thoughtful attempt to raise awareness about one of the most devastating issues impacting American women in modern history: predatory sexual behavior in the workplace. But men largely wear black to black-tie events like the Golden Globes anyway—this isn’t a standout action. Just look at Diego Luna, Bryan Cranston, and Tom Ford hanging out on the red carpet, dressed up for last year’s Golden Globes.

Bearded beaus @diegoluna_, @bryancranston, and @tomford looking dapper as ever on the #GoldenGlobes Red Carpet!

So for men, wearing black isn’t necessarily a “stance.” It’s expected. And Twitter users aren’t happy with the alleged virtue-signaling.

so great they’ll be wearing black this year, a color that men would typically not wear to the golden globes pic.twitter.com/87og5Zpvhe

I’m so inspired by men wearing black to the Golden Globes, an event to which they’d normally wear black tuxedos. It’s part of the storied man tradition of making the least possible effort but expecting credit anyway

Nah sis, not nvm. THE TYPICAL MALE DRESS FOR THE GOLDEN GLOBES IS BLACK. ID SAY ABOUT 85-90% OF MEN WEAR BLACK TO MOST AWARD SHOWS, BUT THATS JUST MY RECKONING. YOU WANNA PROTEST? DONT SHOW UP. GIVE THESE WRONGED WOMEN THE SPOTLIGHT. DO FUCKING BETTER. https://t.co/1GPufILvmY

Others point out that some of the men wearing black may be complicit in sexual misconduct in the film industry. (Will Casey Affleck, who won best actor in dramatic film last year and who has been accused by multiple women of sexual assault, wear black?) Wearing black in a sign of protest is totally hypocritical because some of these men are the problem, or at least enabled the problem with their silence.

Oh, and wearing black doesn’t really end sexual harassment. If they really want to do something about it, maybe Hollywood men should speak up for women who are mistreated by men in the industry—and not just after their predators have been outed.

actors after wearing all black to the golden globes pic.twitter.com/6qXxP8U6v3

Black Women: "Safety Pins are the most useless & performative example of allyship ever"
Hollywood: "Hold my beer" https://t.co/Yai3MZGkP5

just like all the years please shut the fuck up celebs going to the golden globes wearing all black is not going to take away the fact that there are still predators in hollywood https://t.co/vrI7UmjoLN

But if men are hell-bent on ending sexism through fashion, they can pass the red-carpet mic to a woman and ask her to speak on anything except what she’s wearing.

Instead of all this wearing black to protest at the Golden Globes, dudes should decline to give their opinions on the current state of affairs and instead just talk about what they're wearing on the red carpet and what their kids are currently doing.

Overall, as usual, men can do more. Men can do better. It’s time for men in all industries to speak up, act, and leave the performative, empty gestures behind.