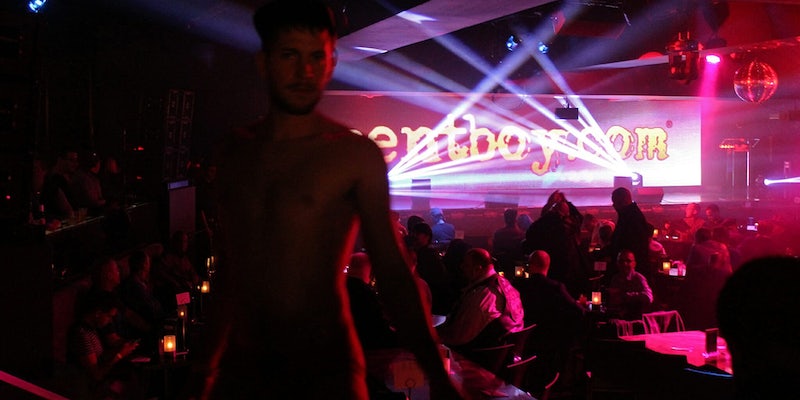 Here’s what men who use Rentboy.com say about the federal government’s raid

Three guys who have been on Rentboy.com talked to us about the raid.

The U.S. government surprised the LGBT community on Tuesday when it raided the New York office of Rentboy.com, bringing criminal charges against seven employees, and seizing six personal bank accounts worth $1.4 million in total.

Today, the community is asking one question: why?

Rentboy.com is nowhere near the size of Backpage or Craigslist, both of which have a history of hosting prostitution ads that were later linked to trafficking and violence. It hardly matches up with Ashley Madison‘s reported 38 million global users, and isn’t anywhere near as well known as popular pseudo-escorting financial-based dating sites like SugarDaddy.com, SeekingArrangement.com and WhatsYourPrice.com.

So why, out of all the sex industry businesses in the nation, did a multi-agency federal taskforce crack down on a gay sex site that has been operating openly for 18 years?

To find out, the Daily Dot interviewed men who have been on Rentboy.com—all three of whom say the federal raid was an expression of homophobia, pure and simple.

“I think this has a lot to do with homophobia and pink-washing,” said Israel, a former rentboy who advertised on the site for seven years and now lives in Seattle. “Like, there’s a particular way to be gay that’s OK. You can get married and act straight and that’s fine, but you can’t be an escort. It has a lot to do with respectability politics. It’s trying to scare people out of taking control of their sexualities.”

Israel told me that he first started doing sex work in a “survival” sense at age 22. At the time, he’d post on Craigslist. He wasn’t charging very much, he said, and “didn’t really know what I was doing.”

“On Rentboy, I was more protected. I was able to make more money and take care of myself and thrive,” Israel said. “My personal experience on Rentboy has been really transformative. To realize that I can take these things into my own hands and live my life the way I want to.”

The site is hard to describe to outsiders. A gay hookup staple that predates apps like Grindr and Scruff, Rentboy fills multiple roles: sex-positive gay social network, escort marketplace, education and charity source, and of course some raging parties. The Rentboy community operates just as much as an advocacy group for queer sex positivity as it does a place to run a classified ad; initiatives like Rent University teach men in the sex trades how to do taxes and run a business safely, and events like the Hookies and HustlaBall give queer sex workers, porn stars, and their fans a place to thrive and celebrate.

“I worked a lot of parties for Rentboy, I signed contracts to do photo shoots for the site, I’ve done a lot of advocacy through them,” said Israel. “The feeling now is that a lot of people are freaked out. A lot of people I know have been on that site at some point in their lives. And now that the federal government has their information, connected to sex work, it’s terrifying.”

Attorneys and LGBT community advocates have organized a Know Your Rights emergency legal training takes place on Wednesday evening at New York City’s Judson Church in response to the fear spreading through the scene.

A Washington, D.C.-based escort who works under the name The Legendary Dave told the Dot that he isn’t afraid of being busted, but he is upset that his friends who work at Rentboy now face time in federal prison.

“On a personal level, it’s a classic case of feeling like the government has really jumped into our private lives and you’ve got to wonder what this is about,” said Dave. “I’m good friends with Hawk [Hawk Kinkaid, psuedonym of Rentboy employee Shane Lukas] and personally, it’s very upsetting. I was just in the offices in New York about two weeks ago.”

Dave said that it would be “paranoid” to think that the federal government would continue the Rentboy crackdown by chasing down each individual man with a profile on the site, not to mention the “hundreds of thousands of people who have hired escorts.” Regardless, he said the raid has “scared the shit out of people.”

“Three of my friends are facing real time in prison and significant fines. And they’re not criminals,” said Dave. “They’re not doing anything to anyone, they’re not traffickers. They are working in an industry based on consent and healthy sexuality.”

Gay cisgender men are hardly the only people using Rentboy. Dave said he’s been hired by women off the site in the past, even women who primarily identify as lesbian. As it turns out, Rentboy is the most accessible market for anyone looking to hire an attractive man for a little company.

“I was the first trans man on Rentboy,” said Angel. “There is nothing illegal that goes on there. Escorting work is not necessarily illegal. You can be friends with people. I actually go on there to connect and make friends. I travel all across the world and I love meeting people.”

A trans-friendly gay hookup site is a rare commodity. Trans men often complain of inappropriate treatment on Grindr, or even of being kicked off the app. But on Rentboy, said Angel, cisgender men who are curious about trans guys have an easy way to reach out and make connections.

“A lot of guys want to meet guys like me but they are nervous and scared,” said Angel. “I help them understand that to be sexually attracted to a man like me is OK.”

Both Angel and Israel said there was nothing remotely resembling sex trafficking or exploitation on Rentboy. To be clear, the U.S. Attorney’s complaint against the company’s seven employees didn’t allege trafficking either—which is why the crackdown is so unusual. Most federal efforts to shut down online sex markets focus on an anti-trafficking “savior” rhetoric. But with Rentboy, money appears to be the only clear motivation for the bust: $1.4 million to be exact.

But because the Rentboy bust appears to have come out of the blue, many are decrying it as an act of sheer homophobia.

“This is a human rights violation. You can’t tell people they can’t talk about their sex lives online,” said Angel. “I think this has a lot to do with gay men. In the U.S. we have a lot of homophobia going on. It makes no sense that they would go after this site. We’re all adults! If you want to massage another guy, who cares?”

“It makes people think of 20 years ago when Guiliani was trying to close all the gay bathhouses in New York, like it’s part of the AIDS panic,” said Israel.

On Wedesnday, the Transgender Law Center issued a statement condemning the raid.

With this raid, the U.S. federal government is not only jeopardizing countless people’s lives and only source of livelihood, but sending a clear and troubling message that the country is less invested in addressing systemic issues of racial, economic, and anti-LGBT injustice than in further criminalizing the individuals most marginalized by those systems.

Last week, Transgender Law Center and four other U.S.-based LGBT advocacy organizations issued a statement in support of Amnesty International’s call to decriminalize sex work. Yesterday’s action by the federal government is a clear demonstration of why LGBT organizations and people must be invested in this work to protect the human rights of sex workers. Laws criminalizing sexual exchange impede sex workers’ ability to negotiate condom use and other boundaries, and force many to work in hidden or remote places where they are more vulnerable to violence. Actions like the government’s raid contribute to the unjust and unacceptable systems and society we have today, from the disproportionate incarceration of Black transgender and gender non-conforming people to the epidemic of violence against transgender women of color.

Angel was skeptical about whether the larger national LGBT organizations would rally to Rentboy’s side after the raid: “I highly doubt GLAAD [formerly the Gay & Lesbian Alliance Against Defamation] is going to come to the rescue.”

All three of the men the Dot interviewed said that many of the people they talk to in everyday life are more supportive of sex work than you might think.

“I’m out about my work,” said Dave. “And when I meet people on flights or on the street, the question is always ‘what do you do?’ I tell them. I would guess that about 75 percent of people I meet also have some connection to the industry—either they’ve done it or know someone who has. It sounds like a high percentage, but it’s not far off. Most people I meet react positively.”

Israel said that gay men are “less uptight” when it comes to sex work. Many of his clients, he said, also did some form of sex in exchange for cash when they were younger: “It’s a very normalized thing in the gay community.”

He also stressed that sex work suffers from an inaccurate reputation. Far from just being about sex, there’s a lot of emotional caretaking and companionship that escorts offer. That’s Israel’s speciality: this year, he was up for a Hookie award for “Best Boyfriend Fantasy.”

Female sex workers often say the same thing about their work—that it’s more about companionship than most people think. But for gay men, a sex worker can fill a specialized role as well. On Rentboy, there are several profiles listed in countries like Saudi Arabia—countries where homosexuality is illegal, even punishable by death. Just this week, two gay men from Iraq and Syria spoke to the UN Security Council about being relentlessly hunted by ISIS. It’s not always an option to live as an out gay man. And that’s where an order-a-man website can save the day.

“As a queer sex worker, I help people who are curious and have never really had the space to explore their sexuality,” said Israel. “I have openly gay clients but I also have a lot of closeted clients, and I provide a space for them to start feeling comfortable with it. Or people who just want to explore. That’s something that escorts in general provide, but particular important for gay men who are still in the closet.”

With the recent Ashley Madison hack, it became clear that men all over the planet like to meet up with other men in secret. And that doesn’t always just mean sex.

“I have a lot of clients who really spill their stories to me,” Israel said. “People want to get really focused on the sex aspect, of course, but that’s so dehumanizing. We aren’t objects or victims. We go into this work and have a lot of care and emotions invested in our clientele.”

Photo via istolethetv/Flickr (CC BY SA 2.0)