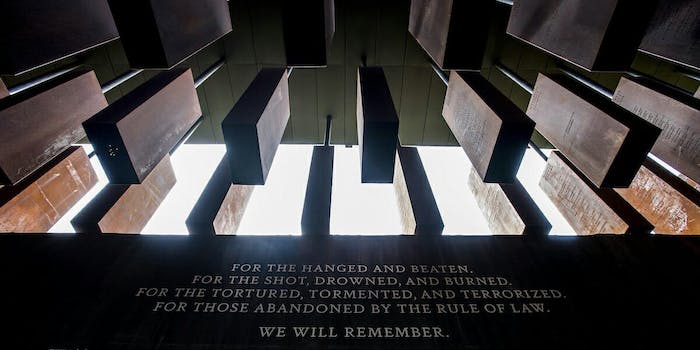 The first U.S. memorial dedicated to lynching victims has opened

As many advocates note, it's about time.

The first U.S. memorial honoring the thousands of Black people who were lynched in the country following the Civil War opened in Montgomery, Alabama, on Thursday.

Created by the Equal Justice Initiative, the National Memorial for Peace and Justice, which overlooks the state capitol, pays respect to the more than 4,400 lynching victims between 1877 to 1950 uncovered by the non-profit’s research, many of whom are merely listed as “unnamed” at the memorial.

Equal Justice Initiative founder, Bryan Stevenson, said the memorial takes inspiration from the Apartheid Museum in Johannesburg, South Africa, and the Holocaust Memorial in Berlin, Germany. Inside the memorial, more than 800 steel columns hang from a roof—each one representing a U.S. county where lynchings took place—and the 4,400 names are marked on the columns. Markers along the walkway describe in detail the individual stories of some of the killings.

“I’m not interested in talking about America’s history because I want to punish America,” the attorney told the New York Times. “I want to liberate America. And I think it’s important for us to do this as an organization that has created an identity that is as disassociated from punishment as possible.”

When visitors first enter the memorial, they are met by a sculpture on slavery by Kwame Akoto-Bamfo, according to its website. Visitors are then led through monuments and narratives on lynching and racial terror. The memorial experience continues through the Civil Rights era, with a sculpture by Dana King dedicated to the women who sustained the Montgomery Bus Boycott. It ends with contemporary issues of police violence and racially biased criminal justice expressed in work by Hank Willis Thomas. The memorial also includes writing from Toni Morrison, words from Dr. Martin Luther King Jr., and a reflection space in honor of Ida B. Wells.

For many, the memorial and the nearby Legacy Museum, which uses technology to dramatize slavery and injustice, have been long-needed in a country that still hasn’t reconciled with its racist past—a past that continues to permeate our culture and justice system. As the Huffington Post noted, the lynching memorial opened just days after Alabama celebrated Confederate Memorial Day.

When I went to the Holocaust Memorial in Berlin I said "imagine our country building something like this to memorialize the victims of our greatest national shame" and wow I stand corrected https://t.co/7C5x5zwLfm

If you sincerely believe in justice and dignity for all, make the pilgrimage to Montgomery, Alabama to experience the lynching memorial and legacy museum established today by Bryan Stevenson and his stellar team at #EJI. It will take your breath away, then breathe in new life. pic.twitter.com/hPio0BNiwD

We can't glorify our nation's past at the expense of this bloody and shameful truth. We must etch the history of white supremacy in our collective consciousness so we can approach the present and the future with more humility and empathy. @MemPeaceJustice https://t.co/APUO00t1Kf

Proud to help celebrate the opening of this important memorial today in Alabama https://t.co/SBdT03KC8B

The museum and memorial are now both open to the public. Tickets to enter both buildings cost $10 for adults and $7 for seniors and students.