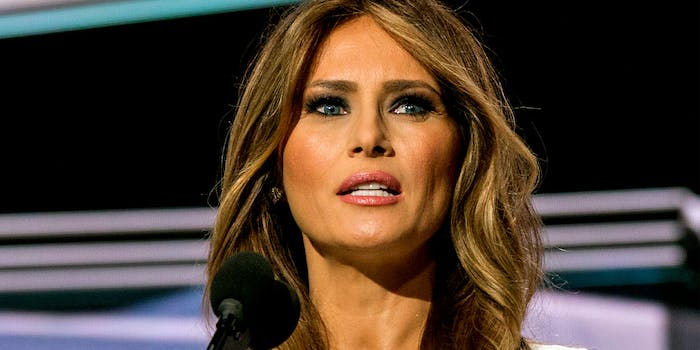 Her husband was literally recorded admitting to sexual assault, but OK.

First Lady Melania Trump‘s exclusive interview with ABC doesn’t air until Friday, but viewers are already taking issue with comments the first lady made about sexual assault accusations, and the evidence supporting them.

In a preview shared online, Trump said that if someone accuses “of something,” such as sexual harassment, assault, or rape, they “need to have really hard evidence.”

Trump said that she believes “women” who have come forward under the #MeToo movement since last October, and that they should be supported and heard, but added, “also men, not just women.” While Trump could have meant that male survivors of sexual assault and abuse should also be heard, she clarified in later answers—when asked if she thinks men who have been accused have been treated unfairly—that she thinks accused men should also be listened to.

WATCH: One-on-one with First Lady @MelaniaTrump. She's opening up for the first time about her life and her time in the White House to @TomLlamasABC.

"Being Melania – The First Lady" airs THIS Friday at 10|9c on @ABC: https://t.co/BFuO7gPBkP pic.twitter.com/MqXC5NuVMn

At least 19 women have said Trump’s husband, President Donald Trump, has committed some sort of sexual misconduct against them, including instances of sexual harassment and assault. Trump has denied all accusations, calling several of the women liars.

Trump himself has positioned himself as the “believe men” president, such as when he urged Alabama constituents last November to listen to Republican Senate candidate Roy Moore when Moore said he didn’t date teenagers when he was in his 30s. In his administration, too, Trump wants America to continue to believe the word of men accused of assault, with Education Secretary Betsy DeVos removing certain Title IX guidelines for college sexual assault survivors, and consulting with men’s rights movement organizations about campus assault.

In 2016, the Washington Post released a recording of the president bragging about sexually assaulting women, saying that he was so famous, he could do “anything,” including grab women’s vaginas. To the very real hard evidence that her husband assaulted women, the first lady said she had accepted her husband’s “apology.”

Melania Trump’s stance on #MeToo, while not much different from the president’s, is particularly hedged on this burden of proof, of survivors, to have evidence of their assault. According to RAINN, out of 1,000 rapes, only 310 are reported to police, with many choosing not to report because of fear of retaliation, worry that police would do nothing, or because they were told to believe their assault didn’t matter, among other reasons.

Trump’s comments, though just an excerpt from her full interview to be aired later this week, are already facing criticism.

The pervasive belief that Melania Trump holds beliefs that are radically different than her husband's is not supported by evidence https://t.co/NpWcZkX7eN

All yall who’ve said Melania is just a victim of Trump and not a partner in his fascism need to apologize now. https://t.co/3PY0akzJH7

Otherwise, it seems, they should shut up. https://t.co/BXcjEKErlt

Many people have connected her “hard evidence” comment to the audio recording of the president, as well as her position in the birther movement that questioned former President Barack Obama’s U.S. citizenship despite clear evidence that he was born in the country.

.@FLOTUS, do you mean, like tapes of a man on a bus boasting about how being a star gives him license to sexually assault women? https://t.co/sKNMogz9zn

Please tell me they asked @FLOTUS why she was a birther with no evidence https://t.co/UxI8zblqOh

Does Melania think women need to provide evidence even when the guy admits to sexual assault — on tape? https://t.co/NKd70F7ZO9 https://t.co/8L5i1uPA96

The first lady’s comments comes on the heels of comments her husband made earlier this month. At a rally, the president mocked Christine Blasey Ford, the woman who said Trump’s then-Supreme Court nominee Brett Kavanaugh attempted to rape her when they were in high school and who testified in front of the Senate Judiciary Committee. Trump also evoked his own accusers during his speech, characterizing them as false.