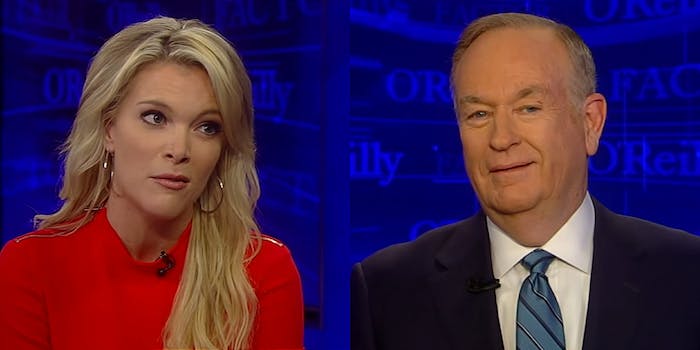 The morning host is not here for O'Reilly's lies about sexual harassment.

On Saturday, the New York Times revealed that Bill O’Reilly paid out $32 million for a single sexual harassment settlement last year. The former Fox News anchor, who has also paid out $13 million to avoid five other sexual harassment lawsuits, quickly fired back, saying this latest revelation was nothing but a smear campaign by the media.

“In the more than 20 years Bill O’Reilly worked at Fox News, not one complaint was filed against him with the Human Resources Department or Legal Department by a coworker, even on the anonymous hotline,” an O’Reilly spokesperson said in a statement.

Welp, Megyn Kelly says that simply it’s true. “I know because I complained,” she said on her NBC show, Megyn Kelly Today, on Monday.

“Fox News was not exactly a friendly environment for harassment victims who wanted to report, in my experience,” she said, so perhaps those two department’s mentioned weren’t notified. “However, O’Reilly’s suggestion that no one ever complained about his behavior is false.”

“O’Reilly’s suggestion that no one ever complained about his behavior is false. I know because I complained.” @megynkelly on Bill O’Reilly pic.twitter.com/BO8ifQcJbu

In a monologue on her show, Kelly explained how in November 2016, when her memoir was released, O’Reilly was being interviewed by CBS. When asked about Kelly’s book and the settlement she’d reached with Fox News founder Roger Ailes over sexual harassment allegations, O’Reilly said, “I’m not interested in this… I’m not interested in making my network look bad.”

Kelly said she was upset by his response and wrote an email to the co-presidents of Fox News, which, in part, said:

“Perhaps he didn’t realize that his exact attitude of shaming women into shutting the hell up about harassment on grounds that it will disgrace the company is in part how Fox News got into the decade-long Ailes mess to begin with. Perhaps it’s his own history of harassment of women which has, as you both know, resulted in payouts to more than one woman, including recently, that blinded him to the folly of saying anything other than ‘I am just so sorry for the women of this company who never should have had to go through that.’”

According to Kelly, one of the co-presidents responded by saying he had talked to O’Reilly, but that meant the host “was permitted with management’s advanced notice and blessing to go on the air and attack the company’s harassment victims yet again.”

“Women everywhere are used to being dismissed, ignored, or attacked when raising complaints about men in authority positions,” Kelly said. “They stay silent so often out of fear—fear of ending their careers, fear of lawyers, yes, and often fear of public shaming, including through the media.”

Former Fox News host Gretchen Carlson, who also accused Ailes of harassment, bit back at O’Reilly’s assertion that the settlement was a lie, as well.

Nobody pays $32m for false allegations – nobody https://t.co/qB3njcHHuy

As Carlson said in a following tweet, these allegations aren’t a conspiracy against O’Reilly or Fox. “Women are getting brave,” she said.

No need to wait for Monday. Another right wing conspiracy? Women are getting brave #truth #Befiercebook #metoo https://t.co/c9LSAHs9Y1