The ghost hunters of Meetup

There is a place in my hometown called Zena, and it’s haunted.

Zena was a church—a simple, pioneer church, with a crumbling, ancient cemetery for a front lawn. I have no memory of the first person who told me Zena was haunted, but that morsel became fact, cemented in my brain as an absolute truth.

The exact sort of hauntings Zena was home to were imagined by my friends and I and passed around exhaustively. The exotic name—at least, exotic to a bunch of incredibly suburban teenagers living in Salem, Ore., who went to St. Joseph’s elementary and attended a middle named after a catholic bishop, rendering any church that didn’t come with a “saint” prefix strange, let alone one named after a woman—meant it was a witch church, and that bodies of children filled the graves, their ghosts wandering the grounds at night. The was also the silhouetted apparition who would bicycle around the site. And then there was the fact that the church itself faced the sunset, not the sunrise, which churches are supposed to do. This meant Zena was the devil’s home.

On summer nights, weary of rotating between our parents’ homes or fast food parking lots, listless from the infuriating boundaries of what’s supposed to be three months of freedom, my friends and I would pile into someone’s car and drive to Zena. The drive began a thrill, but as we edged closer, quiet. We’d nervously giggle, eyes welling with tears we couldn’t explain. Admittedly, part of the terror (and excitement) could be blamed on the fact we were trespassing, but it was also the unknown of Zena. All we knew were stories—but once we parked the car and killed the lights, we’d convinced our minds and our minds convinced our goosebumped bodies that something was there.

We knew what we were doing was slightly… you know, weird. It’s not an event we would publicize and invite anyone to: We went together because we knew it was OK, that these were people we were safe with. We were thrill-seeking, really, an arguably innocent form of it, but that’s what we were doing. Being scared is fun; we wanted to be terrified. But we didn’t want to be terrified alone.

There are a lot of places on the Internet for the “weird.” Twitter is one, Tumblr absolutely another. But by and large, online communities that can be safe havens online aren’t able to extend that comfort to the real world. It’s what’s uniquely positioned Meetup as a home for the off-kilter, a home that starts online and ends IRL. A home for ghost hunters.

Margaret Ehrlich runs a Meetup group for ghost hunters in Maryland. When Ehrlich was younger, her interest—and experience—with the paranormal began. In a story she shared with me, Ehrlich wrote:

“A few weeks later, feeling ill, I was unable to attend school. I was in the living room watching TV when all of a sudden the dog jumped up and started to bark at the stairs that led to the second floor. Being the only one home and scared I decided to investigate the action of my dog. Halfway up the stairs was a landing with a full length mirror on the wall. Much to my surprise, I noticed the mirror reflecting the image of a woman in an old-fashioned gown. Petrified, I took the dog and sat on the front porch until my brothers came home. Relieved to have my brothers home, I told them what happened and one of my brothers told me what he was experiencing in his room.

“Being an old house with minor renovations, our ceilings were replaced with drop ceiling tiles. At night my brother would lie in bed and watch the ceiling tiles move. He told me how the tiles would rise up and lie over and minutes later would move back over and slide back in place. He would watch this until he fell asleep.”

Despite growing up around strange happenings, Ehrlich says it wasn’t until later in life she formally took up paranormal investigation. “Going through a change of life like a divorce and having your children grown and moving out made it easy for me to find something like this to do,” she says.

But why Meetup? There are arguably a host of better known community-oriented platforms. Craigslist, Yelp—Facebook, even. But not all websites are created equally, at least as far as incredibly niche groups go. Facebook is too big, your personal objective easily lost in the noise. Yelp was long ago turned into a foodie’s paradise, a place for would-be restaurant reviewers to collectively write their way into benefits. And Craigslist… well, we all know the risks you take there. “I’ve heard of people using Craigslist, but that seems unsafe,” as Ehrlich mildly puts it.

She’s right, of course. In my quick perusal of Craigslist ghost-hunting groups, I found one that requested his ghost-hunting sidekick be about 5’6”, busty, and brunette. Many were listed in the hookups section of the site.

If common sense tells me I should bring a pal and meet in daylight at a public place to complete a Craigslist exchange, I’m going to go ahead and suggest that ghost hunting (an activity that typically takes place at night, in dark, isolated, possibly haunted, places) is best sought elsewhere.

And while Yelp does feature ghost-hunting expeditions, they are the prepackaged tour kind, and the Yelp Talk threads about paranormal investigation are generally just as pedestrian. Don’t even attempt to use Facebook for something so niche: The beast is too big for effectively finding a group near you that will actually commit to seeing it through and stick with it over time; Facebook is, after all, a land of flakes, with its noncommittal events (we’re always just “maybes,” and we always decided day of, more often than not throwing in some excuse). Whereas with Meetup, the stats are impressive: There are over 19 million Meetup members in 181 countries around the world, and nearly 500,000 Meetups every month.

“Companies like Yelp, Facebook, and more do a great job connecting people online—but they don’t facilitate long-term, offline connections the way Meetup does. We believe in the power of face-to-face interactions,” Meetup reps tell me. And the super-niche is where Meetup thrives: “What’s so powerful about Meetup is the fact that you don’t have to rely upon your existing connections to pursue an interest or hobby.

“If your friends and family aren’t into ghost hunting, but it’s a passion of yours, Meetup allows you to form or tap into an existing community of people who are just as paranormally passionate as you are. No matter how general or specific your interests may be, Meetup allows you to connect, without judgment, to like-minded people near you.”

Ehrlich’s group has been around since 2008, starting with six people—it’s since grown to about 20 consistent members. And it’s far from another lame duck Internet group. Initially, she organized guest speakers to come and speak, and later added investigations to the mix.

“Once we got started we decided that we would have one meeting and one event per month. Sometimes we do another investigation but try to keep that one local and cheap. Paranormal investigating is a very expensive hobby, and we realized that most of our people were just average people who didn’t have a lot of money for traveling and expensive investigations. We chose the ones that are closer to home and they don’t cost that much.

“Having a sense for what people want helps to keep us going. I try to make as many happy as I can while keeping in mind what places to go and who to get for guest speakers.”

How novel: An Internet-started group that not only meets consistently, but has worthwhile events. But anti-flakiness alone isn’t the only thing that makes Meetup an ideal platform for those interested in the unearthly. That fact that it create real connections isn’t lost on its users.

“Meetup is a more personal and engaging experience,” says Tony, who leads the Maine Ghost Hunters group. “People get to go somewhere and interact with others and the environments on a more intimate level. Sometimes on Facebook and other social networks you don’t know who you are really engaging with. Meetup makes it more real and brings it to life.”

For most Meetup ghost hunters, it’s the outlet that finally let them realize what was previously a passing interest.

“No, never,” Adrienne Foster tells me when I ask if she ever got together with people to go ghost hunting before using Meetup. Foster helps run the largest Meetup group for ghost hunters out of the Bay Area. “It was hard to find local people who shared my interest in paranormal activity. Whenever I brought up the subject, most of my friends would get glazed expressions on their faces. Taking over Bay Area Ghost Hunters has given me an outlet to pursue that passion in life without boring the friends who don’t share it.” Foster took over the group when the former organizer lost interest and a friend told her that her knowledge of haunted locations suited her for the role. “I thought about it overnight and the following day I clicked on the link and paid the fees that kept the group from dissolving into Internet ether.

“What makes a Meetup group successful is keeping it active. It makes me very uncomfortable when there is no upcoming meetup posted on our home page. I’ve been very fortunate to find a few other friends who share my passion for the paranormal and are willing to help organize meetups.”

The other key, of course, is finding hauntings. As much as those trips to Zena terrified me to the point of near-tears, I have to confess I never once saw a ghost—or anything really. Happily, these Meetups have had more success.

“[In] one of our investigations at Dr. Mudd’s house, one of our lead investigators got a picture of a full body apparition. We sent it into My Ghost Story and they did a show on it,” Ehrlich tells me (and you can see the photo below). “If you look in the mirror on the steps you will see a man standing there. He was not part of our group and [the photographer] did see him there.” 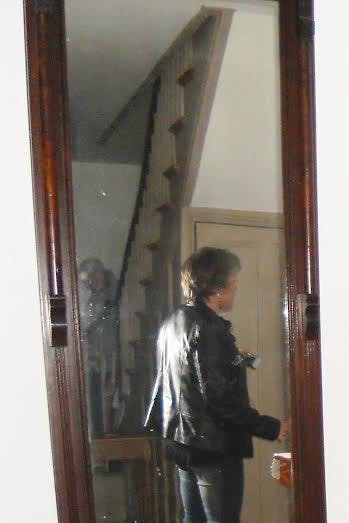