One Tumblr user is calling out months of harassment from a Reddit community.

It’s not news that the Reddit subreddit TumblrInAction lives for mocking the most extreme examples of what it views as Tumblr’s gluttony of “social justice warriors”—a derogatory shorthand for the left-wing political activism, post-colonial theory, and feminism that make up a large part of Tumblr culture.

But ever since the controversial Tumblr medievalPOC first drew TumblrInAction’s attention, owner Malisha Dewalt, whose real name was revealed in an interview with NPR last year, claims she has been harassed, threatened, and even stalked in person from members of the forum. Now, she’s speaking out, and other subreddits are starting to take notice and take action.

MedievalPOC first attracted TumblrInAction’s attention because Dewalt wrote about the whitewashing of Frozen. Using her by-now standard method of simply producing evidence, usually art-based, of non-white people living all over Europe, Dewalt argued that the film’s all-white cast was historically inaccurate. It’s a straightforward approach that has allowed her to produce many similar critiques, most notably of a popular Kickstarter-funded game, Kingdom Come.

Ever since then, the Tumblr has been a magnet for trolls, harassers, and death threats, of which Dewalt claimed to have received at least 30 by late May. The most recent flare-up came Wednesday, when Dewalt posted a link to a recent study of diversity in Hollywood science fiction and fantasy films. Although she wasn’t the one who did the research, or even the one who dug up the link (it was submitted by another Tumblr user), the post went straight to Reddit and Dewalt claims she was bombarded with harassment.

By Wednesday evening, Dewalt had apparently had enough. “Let’s stop pretending we have no idea where this comes from,” she wrote, posting a sampling of some of the harassment she found in her inbox throughout the day:

The TumblrInAction subreddit, like other “wank watch” communities of its kind, has a rule about not contacting the subjects of the blogs posted on the website. Dewalt points out that the rules appear to have no teeth.

“Medievalpoc has received tens of thousands of hits from this particular subreddit from more than 60 separate threads, some of which have hundreds of derogatory comments, using slurs, threats, and racist ‘jokes,'” she stated.

Even more alarmingly, Dewalt claimed she had to call the police on four separate occasions to deal with real-life threats to herself and her family. Here’s how she described the experience:

The truth I’ve been keeping off of this particular blog has been that I have had to call the police and make reports for stalking, harassment, and threats four times in the last 6-8 weeks. People have and/or have attempted to post personally identifying information as well as slander about me, my family, other various loved ones of mine, and a subsequent rush of death threats (including ones posted to other sites), spamming of violent images, pornography, racial slurs, and threats of other kinds of violence from white supremacist groups and others have resulted. Some of them were contacting people close to me. Tumblr, predictably, has had very little interest in acknowledging any of it. It should go without saying that this has greatly affected my emotional and physical health.

This ugliness also affected my recent appearance at WisCon 38, due to people who meant me a great deal of harm encouraging people to show up at the con for some kind of confrontation. The con organizers and the safety committee received emails that greatly disturbed them, leading them to take steps to try to ensure my safety at appearances and panels, as did the security of the hotel hosting the con. For that, I’m very grateful.

Even without factoring Reddit into the equation, Dewalt has plenty of detractors on Tumblr. Numerous Tumblr users have rounded up posts she made that they found problematic, citing historical inaccuracy, unreliable source materials, and her general application of modern racial categorizations to pre-Enlightenment European cultures. She has also come under criticism for refusing to listen to self-identified POC who disagree with her, occasionally overriding the racial self-identification of other Tumblr users, and refusing to acknowledge the racial identity of certain marginalized groups. On her personal blog, she’s been known to fling gendered insults at people who disagree with her. Recently the blog omgstopbeingashittyperson did a round-up of alleged discrepancies they and other Tumblr users had found in Dewalt’s description of her own ethnic identity.

It’s important to note that many of the criticisms of medievalPOC are coming from members of Tumblr who support the nature of her work but want to encourage greater historical accuracy. While the methods of any Tumblr user who claims to be an unofficial historiographer should be subject to criticism, it is, perhaps, even more important to hold bloggers like medievalPOC to a system of accountability because they profit from their blogging; Dewait, who recently sat on multiple panels at WisCon, is currently crowdfunding more than $650/monthly from subscribers on Patreon to help her do her work.

But while many of these internal critics on Tumblr are actively watchdogging Dewalt the way TumblrinAction is doing, they don’t seem to be responsible for the stalking and violent language she identifies in her recent posts on the subject. Meanwhile, harassment and doxing have become well-known tools of anti-feminist and anti-social-justice corners of Reddit, particularly those aligned with the so-called men’s rights movement. These communities, along with 4chan, have gotten in the habit of targeting feminist corners of the Internet, of which Tumblr is a hotbed. Currently, 4chan is allegedly gearing up for yet another “raid” on Tumblr users (click to enlarge): 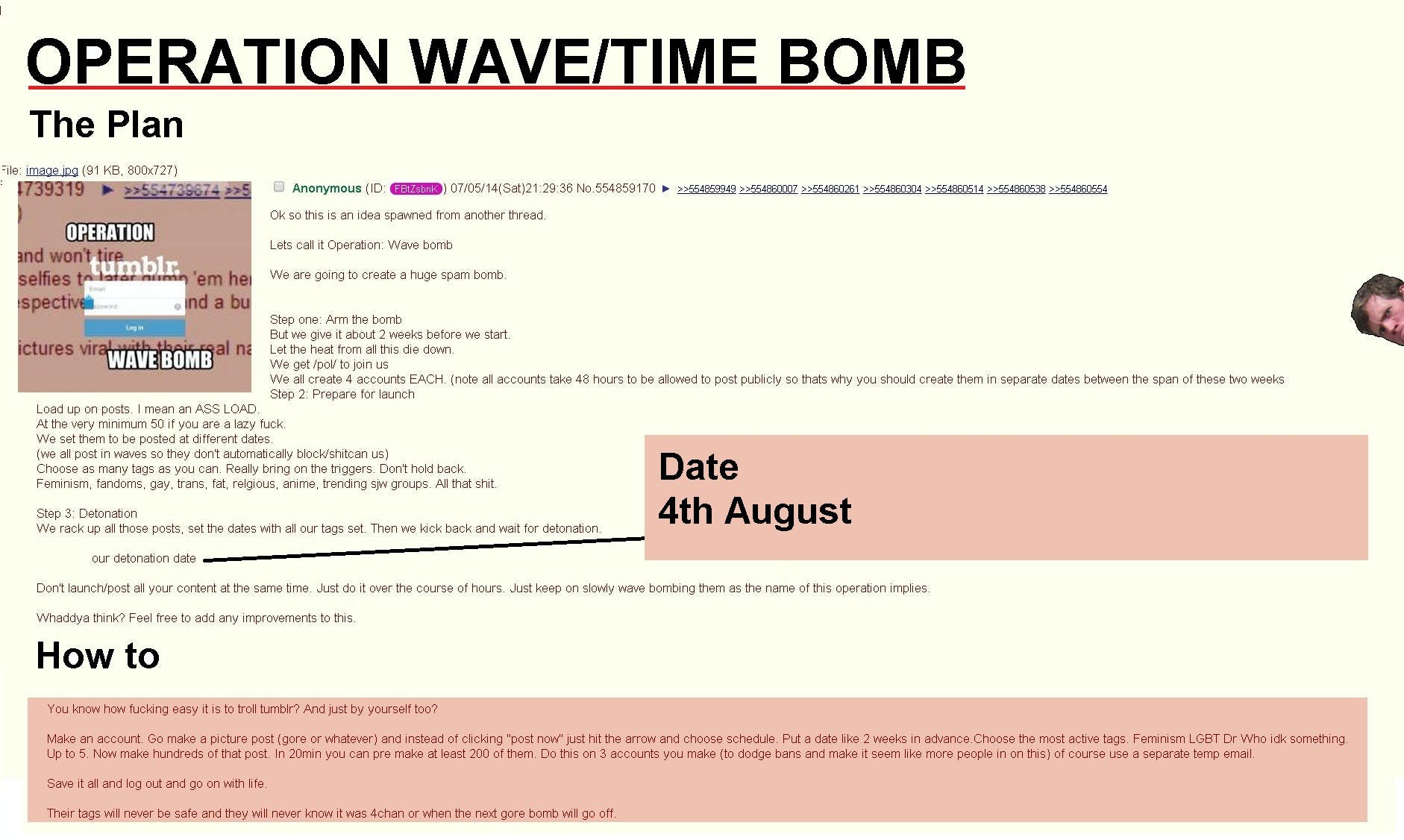 Internally, TumblrInAction seems to have been wrestling with itself over Dewalt’s accusations. Ironically, after her latest post, TumblrInAction did make a new thread devoted to doxing—but it was to urge their members to protect themselves from being doxed by other subreddits, namely r/againstMensRights, which mused briefly after the post about whether it should form a new off-shoot, r/againstumblrinaction. Many members of the subreddit, apparently aware of how much controversy MedievalPOC stirred up on Tumblr without their help, are denying responsibility for the attacks.

On TumblrInAction offshoot r/TiADiscussion, moderator thehat2 posted a stern warning to users and firmly decried any and all harassment of Dewalt or other Tumblr users. On Tumblr, he made a helpful post explaining how to go about contacting Reddit mods to detail any abuse received from subreddit members.

Dewalt, meanwhile, responded to the outpouring of support she’s received for her posts by vowing to continue her work.

While it’s clear that Dewalt’s blog is deeply meaningful to many people, it’s also noticable that the constant harassment and offline incidents Dewalt has endured overshadow the important conversations about the subject matter and the historical accuracy of the work she is asking her followers to fund. While it’s arguable that Tumblr itself is more than capable of devolving into hyperbole and inaccuracy if left to its own devices, its ongoing feud with Reddit unfortunately means that reasonable critique has gotten lost in the waves of trolling and harassment that have become par for the course in any interaction between the two platforms.