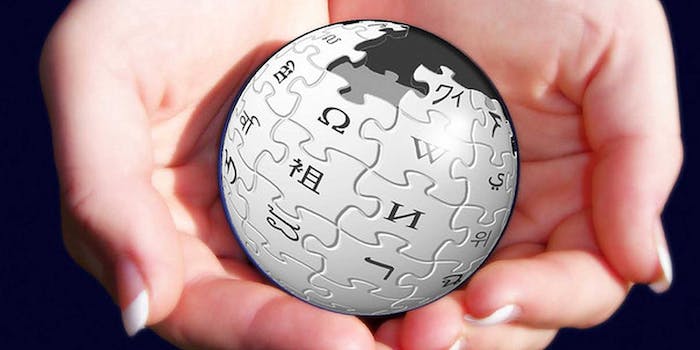 Self-diagnosers rejoice! Wikipedia's medical pages are about to become a little more accurate.

There’s nothing like the Internet to convince you your sinus headache is fatal. But one medical school is hoping to improve Wikipedia’s track record for self-diagnosis.

Some 60 percent of American Internet users have attempted to self-diagnose their medical ailments with the help of websites like WebMD or Wikipedia. But what this technique gains in thriftiness, it loses in accuracy. When you don’t have a licensed medical professional guiding you through the process, it presents a “cybercondriac’s” nightmare where the root of every malady, no matter how seemingly minor, appears to be something potentially life-threatening.

In an effort to improve the quality of medical information available online, University of California San Francisco, one of the nation’s top medical schools, is taking the unusual step of giving its medical students course credit for editing Wikipedia articles people might be using for self-diagnosis.

“We’re recognizing the impact Wikipedia can have to educate patients and health care providers across the globe, and want users to receive the most accurate publicly available, sound medical information possible,” said Dr. Amin Azzam, an associate clinical professor at the UCSF School of Medicine, in a statement.

Azzam noted the program isn’t solely designed to assist people without medical training. Since surveys have revealed a larger proportion of doctors admit to having used Wikipedia for research purposes, putting more accurate information on the site has the potential to improve care throughout the medical system.

Michael Turken, a first-year resident at Stanford and one of Azzam’s former students who helped conceive the course, told the New York Times he first became concerned about the quality of Wikipedia’s medical articles when he went onto the site looking to find how long after infection HIV tests could produce false negative results. Wikipedia said two weeks, but when he checked against a recognized medical source, it turned out the correct figure was 28 days. It was an error, he told the Times, that was being viewed by tens of thousands of people each month.

While Wikipedia has often been rated just as accurate as encyclopedias written and curated by professional editors, the completeness of the site’s medical articles has been called into question.

A study conducted by Dr. Kevin Clauson at Florida’s Southeastern University looked at the Wikipedia entries of 80 drugs and found, even though there were few factual errors, crucial information was often missing. For example, the entry about one anti-inflammatory drug neglected to mention it could cause pregnant women to have miscarriages, and the entry about herbal supplement St. John’s Wort didn’t mention that it has the potential to hamper the effectiveness of a widely prescribed HIV medication.

“If people went and used this as a sole or authoritative source without contacting a health professional … those are the types of negative impacts that can occur,” Clauson told Reuters.

Teaming up with the Wiki Project Med Foundation, a nonprofit dedicated to improving the online encyclopedia’s compendium of medical knowledge, UCSF has targeted 80 commonly accessed articles that also received low ratings for quality.

Once written, the articles will be given to Translators Without Borders and converted into languages spoken in countries where those articles would be useful. For example, an article about Dengue Fever will be translated into Javanese, a language spoken on an Indonesian island where cases of the deadly disease have surged.

Naturally, the course, which is currently open exclusively to fourth-year students and kicks off in December, has its own Wikipedia page.

Medical students aren’t the only ones whose class assignments involve posting to Wikipedia. Earlier this year, over a dozen North American universities banded together in a joint project attempting to fix the site’s notorious gender imbalance by creating or improving entries about prominent women in the fields of science and technology.