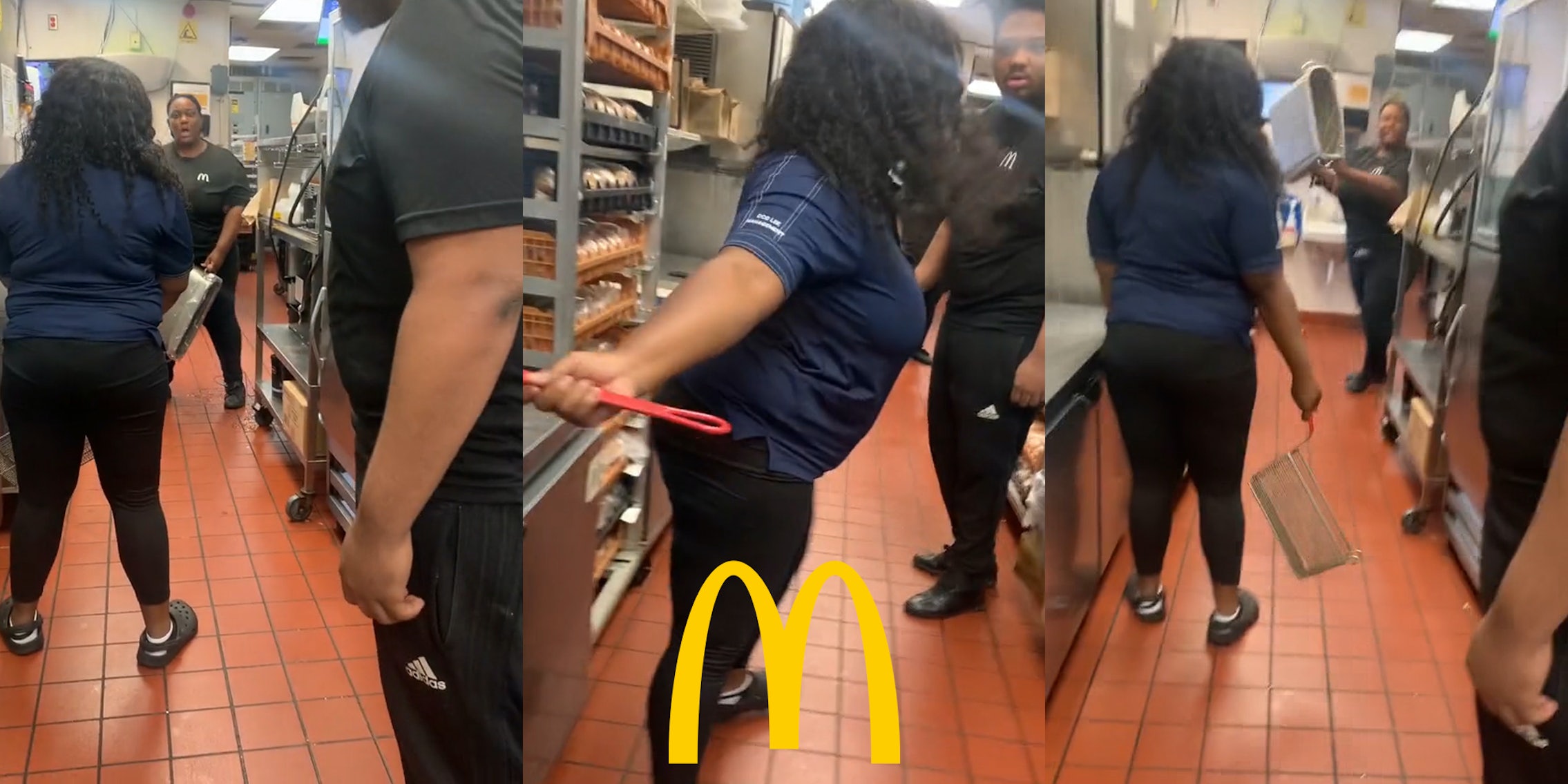 ‘While people like me in the drive-thru STARVING’: McDonald’s workers grab store equipment to fight each other

'This is why it takes forever to get my nuggets and forgotten sauce.'

A viral TikTok shows two McDonald’s employees grabbing equipment from the back of the store, including one of the fryers, to fight each other.

A user on the platform, Renaee (@forever.christyyy), uploaded the clip, sparking a litany of jokes and incredulous responses from viewers. Renaee wrote in the caption of the TikTok, which accumulated 6 million views as of this writing, “Y’all they was finna crash out”

In the video, one female employee makes a b-line towards a metal frying basket used for submerging french fries in hot oil. She grabs one of the baskets by the handle and turns around to approach another employee, who grabs a metal waste basket. The two scream at each other while holding the equipment.

Another worker turns toward the camera, widening his eyes. Other TikTokers noticed the man’s response and provided several quips, stating that incidents like this are why they aren’t able to receive their orders in a timely fashion.

“Bro was flabbergasted,” one said.

“All this while people like me in the drive thru STARVING,” another joked.

“This is why it takes forever to get my nuggets and forgotten sauce,” a third similarly quipped.

Other TikTokers were interested in knowing why the fight broke out in the first place, and Renaee eventually posted a follow-up video. In it, she says, “OK so [one of the workers] kept messing up on orders, so my cousin was the only available person that could go fix the orders.”

Renaee says that her cousin, after repeatedly having to assist the co-worker, asked the employee working the register what the issue was, and she received an aggressively defensive response. This culminated in a verbal altercation that the TikToker says ultimately didn’t turn into a physical altercation. She clarifies it was just a lot of “shit-talking.”

The Centers for Disease Control and Prevention reported that there were 20,050 employees involved in acts of “nonfatal workplace violence” in 2020, and the statistics yielded some recurring trends. Seventy-three percent of all incidents involved women, with 76% of these situations taking place in the social assistance and healthcare industries.

The Daily Dot has reached out to Renaee via TikTok comment and McDonald’s via email for further comment.