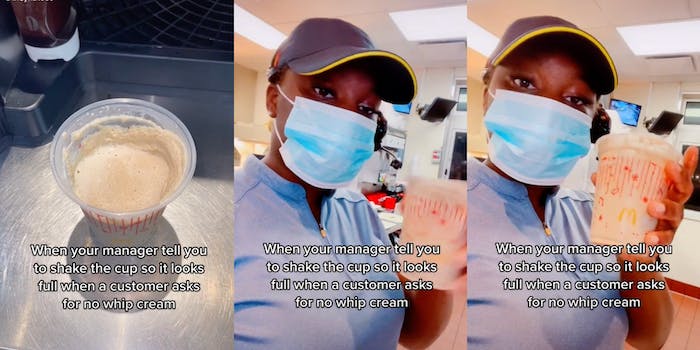 ‘Shake the cup so it looks full’: McDonald’s worker shows how they make drinks ordered without whipped cream in viral TikTok

'This takes more effort than just filling it up but do you.'

In a viral TikTok, a McDonald’s worker revealed what really happens when customers ask for a beverage without whipped cream.

If you’ve ever ordered a drink at McDonald’s that calls for whipped cream, you may have noticed that the liquid only goes partway up the cup. The rest is usually filled by the whipped cream. Some people ask for no whip, either because of preference or presumably to get the most out of their actual drink.

Chanel (@theyhatece), who says she’s a McDonald’s employee, showed viewers what her manager told her to do in those situations.

“When your manager tell you to shake the cup so it looks full when a customer asks for no whip cream,” she said in the video.

Chanel is seen shaking a cup with what may looks like a milkshake inside. She looks at the camera as she follows her manager’s instructions. The TikTok has more than 384,000 views on the app.

It was accompanied by the caption, “Bon’ appetite.” People in the comments are split on the technique. On one side are the people who think the employees should “just fill it.”

“Ima start asking with no lid then,” a commenter wrote.

“This takes more effort than just filling it up but do you,” another said.

“Do u get paid more to do this cus just why,” a person chimed in.

But the majority of people understood that the quantities are preset and largely out of an individual worker’s control.

“These comments are so not it. The workers don’t just give you less to [fuck with you], they follow a set amount per recipe or a machine that’s preset. Karens,” a commenter said in Chanel’s defense.

There were also plenty of workers from other fast-food chains sharing that they do similar things at their stores.

“Nah this was me at chic fil a with that damn tortilla soup,” a person wrote.

“Me at dunkin when they ask for no ice,” a worker said.

“Me at dunkin w shakes,” another said.

“Me filling up drinks with more milk/ water bc ppl asked for light ice,” a commenter added.

The Daily Dot reached out to Chanel via TikTok comment.