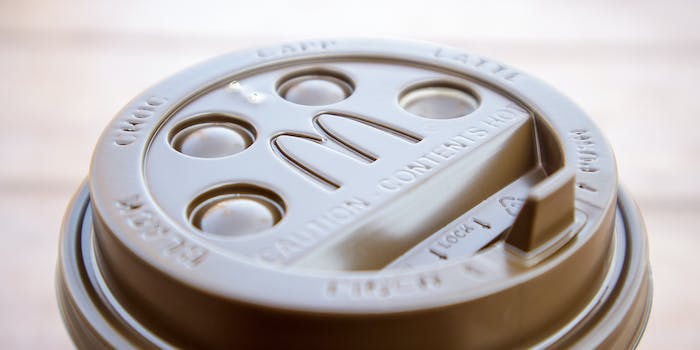 ‘Jesus saw what you did!’: Bystander confronts McDonald’s manager for allegedly throwing drink at unhoused man in viral TikTok

'You're going to do this to a Black man because he doesn't have money for food?'

In a viral video, a TikToker tells a McDonald’s manager off for allegedly throwing a hot drink at an unhoused man asking for food.

The video, which has over 230,000 views and 35,500 likes since being posted on Wednesday, starts with footage of @iamstevierockit, who seemingly goes by Stevie, standing up to the McDonald’s manager.

“You’re going to do this to a Black man because he doesn’t have money for food?,” Stevie says to the worker. “How dare you! That’s disrespectful.”

The video cuts to @iamstevierockit sitting in his car and explaining the situation, with text overlay stating the McDonald’s location is in Los Angeles.

At first, after witnessing the situation, Stevie says he drove off and gave his food to the homeless man.

“I told him, ‘God gon’ be with you. Don’t let that affect you man, stay blessed and stay positive,'” he recalls.

He says he then turned back around and asked the manager why she threw hot water at the unhoused, to which she allegedly replied that it was cold water, not hot water.

“But why did you do it period? I didn’t want to disrespect her, but I told her, ‘That’s wrong. Jesus saw what you did,'” Stevie says.

“I didn’t want to stay in there and turn up ’cause I’m Black, and I didn’t want the police to come… But maybe y’all can @ McDonalds and ask McDonalds to give her a lesson on how to deal with people.”

The video then cuts to footage of Stevie telling the unhoused man he called McDonald’s corporate to report the case.

Most of the 4,887 commenters empathized with the unhoused man and pushed for legal action.

The Daily Dot reached out to @iamstevierockit and McDonald’s for comment.