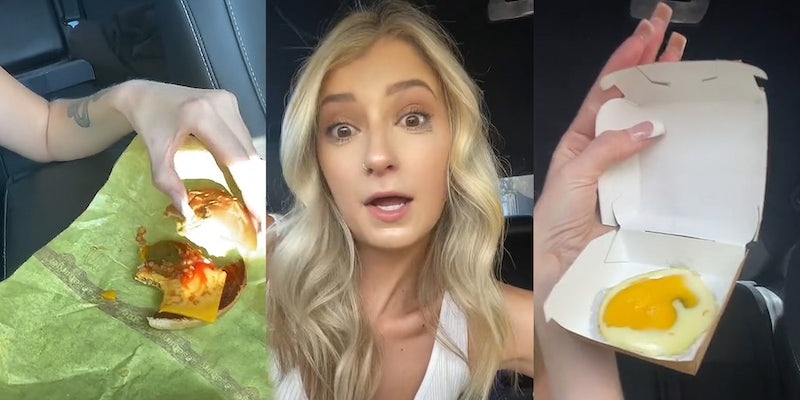 ‘They realllllly undercooked the chicken’: McDonald’s customer receives egg instead of chicken nuggets, no patty on burger

'Why is there an egg in here? Breakfast has been over for two hours.'

A TikToker has gone viral after claiming that McDonald’s messed up her order in one of the strangest ways imaginable.

User Jessica (@jessicagardner585) says that after having a “terrible day,” she stopped by McDonald’s before work. There, she ordered a burger and some chicken nuggets.

But that’s not what she got, as her video that has over 1.7 million views reveals.

“I got a burger. They forgot to put the patty on it,” Jessica says. The video then shows the burger, which is indeed missing its patty.

The nuggets faced similar issues in that there were no nuggets at all. In their place was a single cooked egg.

“It’s an egg,” she says, showing the small nuggets container with the egg. “Why is there an egg in here? Breakfast has been over for two hours. I just wanted a meal before I go into work.”

In comments, users made jokes about Jessica’s situation.

“They realllllly undercooked the chicken,” one user wrote.

“Honestly, just call in…. work will understand,” another added. “No point in trying anymore for the day.”

“They really said ‘can I offer you a nice egg in this tryin’ time’ smh,” a third wrote.

Others recalled their own odd order mixups.

“I once ordered nuggets but it was a container full of pickles,” a commenter claimed.

“One time I ordered a coke to help improve my day and they gave me black coffee in a soda cup,” a second user recalled. “I too cried.”

“I am not a coffee drinker and one time I just really needed a coffee…they gave me a hot cup of milk,” a further user alleged.

However, one user offered a potential explanation of what happened. “A vegetarian probably ordered the egg for the burger instead of a patty and they mixed their order with yours. (as a vegetarian this seems plausible),” they suggested.

On Jessica’s part, she says she ended up going back to the store and getting a refund.

“I’m not sure if it was genuinely a messed up order and I got someone else’s order, [or] if it was, like, a prank,” she says. Regardless of the motivation, Jessica says she opted to go for Chik-fil-A the next time she had a fast food craving.

“The lord never messes up an order,” she claims.

We’ve reached out to Jessica via TikTok comment and McDonald’s via email.