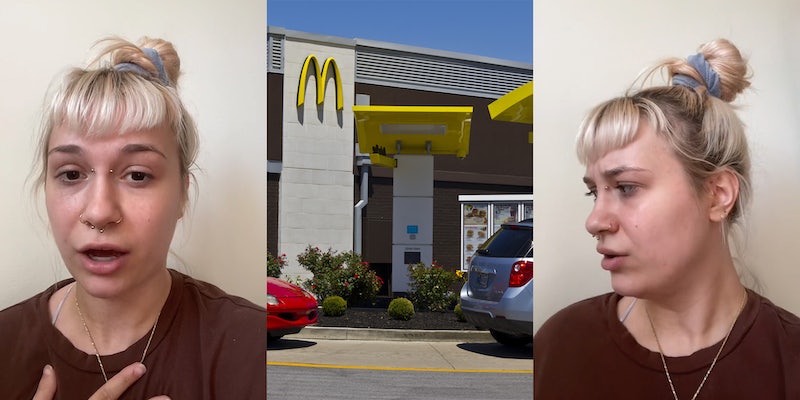 ‘She should really turn the mic off before calling customers ugly’: TikToker says McDonald’s drive-thru worker called her ‘ugly’

'I thought only Starbucks had cameras at the speaker.'

Pop singer/songwriter and TikToker Brielle (@celestialshortie) claims that she was called “ugly” while ordering a beverage through a McDonald’s drive-thru in a now-viral TikTok. Users on the platform debated as to whether or not the comment was directed at her.

“Like damn i know i look a lil busted rn but come onnnn,” Brielle wrote in the caption.

Brielle says in the clip, “So I just called ugly by the McDonald’s drive-thru lady?” She gives a short laugh before explaining her story. She says the drive-thru line was quite long when she arrived, but she was thirsty and decided to wait it out. Brielle adds that she ordered her drink without a hitch—however, she could only move her car slightly forward after placing her order due to the congested drive-thru.

“I go to pull away but I can’t move up because there’s a car in front of me so I kind of just move up like two inches, maybe five, I don’t know,” she explains. “And, not even ten seconds after I had completed my order I hear whoever, the woman who took my order, I hear her go, ‘she was ugly.’ Through the fucking speaker.”

“So I go, what the fuck? Now, I’m a little hurt, so I get up to the window and I go ‘hi um did you take my order?’ And she goes, ‘no, why?’ And I go, ‘well you should probably tell whoever took my order that she should really turn the mic off before calling customers ugly.'”

The video then transitions to another angle that shows Brielle staring down the lens of her smartphone. “I hope you get fired, bitch,” she says.

TikTokers who saw Brielle’s video, which has amassed over 113,000 views, offered up some potential explanations as to what could’ve happened in the drive-thru.

Someone who worked at McDonald’s said that employees can’t see the customers.

“I work at McDonald’s, we can’t see they people who are ordering. I truly don’t think it was about you. I take the orders. I usually talk to coworkers,” one user said.

“We can’t see you at the drive thru so probs wasn’t talking about you but still not okay,” another claimed.

“I thought only Starbucks had cameras at the speaker,” a third questioned.

One user argued that if this was a Mickey D’s in the South it might’ve been a colloquialism to describe someone’s attitude, tone, or personality—and not necessarily their physical appearance.

“Do you happen to live in the south ? Sometimes ugly doesn’t mean looks it’s more about attitude,” one viewer suggested.

Other users on the platform thought the entire ordeal was funny, while some expressed sympathy.

“Why is someone so irritated by somebody’s looks like that you’re too gorgeous for that bs I’m sorry,” one user wrote.

“Girl you are so far from ugly and only insecure people bring others down,” another viewer said.

It does seem that there are some McDonald’s locations, however, that do have cameras installed in their drive-thru systems. Obsev.com penned a piece explaining why the chain has implemented this feature: “Most customers don’t realize that McDonald’s restaurants have cameras aimed right at them when they’re using the drive-thru. According to McDonald’s employee Katie Clarke, there’s a camera at the ordering station that’s aimed directly towards the area where customers stop to place their order.”

The article references another TikTok user, Katie Clark (@katieeclarkee) who discussed how and why cameras are used in restaurant drive-thrus: it’s basically to help employees know which order belongs to who.

I get asked this all the time sooo ahahah

So there is a possibility that the location Brielle visited did have a camera installed, and the worker could’ve seen her face and commented on her appearance.

The Daily Dot has reached out to McDonald’s via email and Brielle via Instagram direct message.