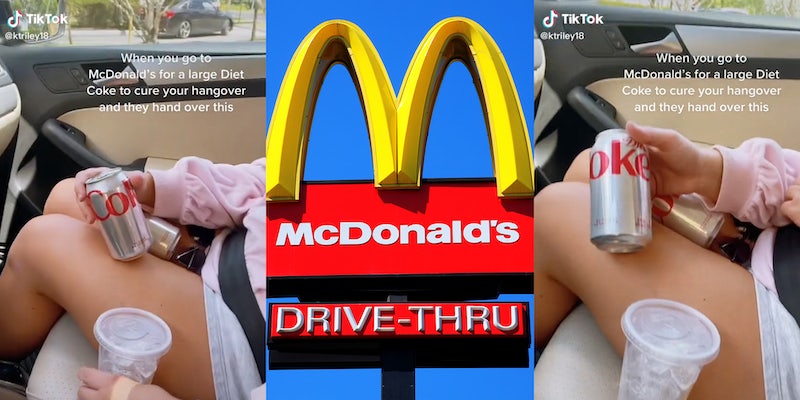 ‘Would have been my last straw’: ‘Hungover’ customer receives canned drink after she ordered large Diet Coke from McDonald’s

'When you go to McDonald's for a large Diet Coke to cure your hangover and they hand over this.'

TikToker @ktriley18 (Katie Riley) claimed that in order to “cure” her hangover, she visited a McDonald’s location to purchase a Diet Coke. She says she was handed a cup of ice and a can as opposed to a drink from the fountain machine.

In her video, Riley wrote in the text overlay: “When you go to McDonald’s for a large Diet Coke to cure your hangover and they hand over this.”

The person in the passenger’s side of the car is holding two canned Diet Cokes, and two cups of ice are also visible.

“Hey guys, I hope you are having a great day, not just a good day. I’m going to be honest, my day has not been that great,” the sound Riley used for the video notes.

While it’s unclear why Riley allegedly received a canned drink instead of a fountain drink, a number of businesses have been affected by supply chain issues. These supply chain woes have not only affected the prices of several items but have had a significant impact on the quantities of products available, like computer chips, for example.

These issues have also affected the food industry, even McDonald’s. In 2021, the chain reportedly wasn’t able to fulfill milkshake orders for some customers as many chains only had a limited number of shakes available. More recently, McDonald’s purportedly increased the prices of its burgers in some regions amid supply chain problems as well. Alistair Macrow, CEO of McDonald’s U.K. wrote in an email to customers, per CIPS: “Today’s pressures mean, like many, we are having to make some tough choices about our prices. We know things are tough right now. We’re living through incredibly challenging times and we’re all seeing the cost of everyday items, such as food and energy, increase in a way many of us have never experienced. Just like you, our company, our franchisees who own and operate our restaurants, and our suppliers are all feeling the impact of rising inflation.”

The Washington Post reported that, toward the end of 2021, the soda industry was experiencing supply chain issues at large, mostly due to transportation issues along with securing procurement of bottles and cans in order to package their products in. However, there was no mention of syrup itself being affected.

TikTokers who saw Katie’s post shared their own experiences with McDonald’s swapping out fountain drinks with cans or bottles. “Stop the other day i doordashed mcdonalds and they sent me a bottle of diet coke…..i almost spiraled,” one of the top comments reads.

Others echoed her disappointment stating they, too, would’ve been upset if they weren’t given the fountain drink they were accustomed to getting at the chain. “if i was expecting crispety crunchety McDonald’s fountain soda and got this, i would sue,” another said.

The Daily Dot reached out to Katie via TikTok comment and McDonald’s via email.