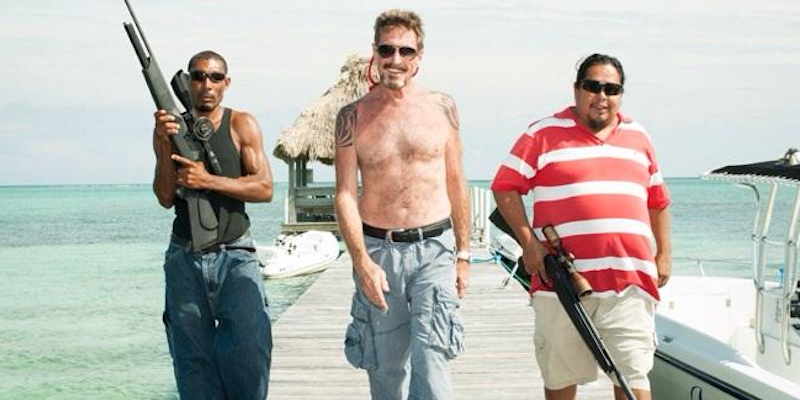 Antivirus software pioneer and unspeakably entertaining fugitive John McAfee brought his head above ground Tuesday morning. Aiming to clear up “all of the misdirections over the past few days,” McAfee wrote on his Who Is McAfee blog that he’s entrenched within Guatemala “and will be meeting with Guatemalan officials this morning.”

“If all goes well I will do a press conference tomorrow,” he added.

According to Vice Magazine editor in chief Rocco Castoro, McAfee is currently in the country’s capital, Guatemala City, where he spent the morning breaking bread with Telésforo Guerra, a high-profile lawyer who once served as the country’s attorney general.

McAfee is on the run from Belizean law enforcement after he was named as a suspect in the murder of his neighbor Gregory Faull, whose dogs, apparently, McAfee did not much care for.

The 67-year-old had originally fled his home with a young lover named Sam—coincidentally Guerra’s niece—before jetting off to Guatemala with two members of Vice Magazine’s editorial crew, including Castoro.

Vice‘s involvement in the saga became a heated talking point Monday after a photo of McAfee, posted on Vice.com, revealed the fugitive party’s location: along the banks of eastern Guatemala’s Rio Dulce.

Everybody involved quickly backtracked after Twitter caught wind, but their stories didn’t hold much water. In his address this morning, McAfee allowed that Vice is still embedded with the maniacal millionaire and that the location leak was the fault of “an unseasoned technician at Vice headquarters.

“We made it to safety in spite of this handicap,” McAfee assured his readers, adding that he did have to cancel “numerous interviews with the press yesterday” as a result of the dustup.

A quick visit to Who Is McAfee indicates that McAfee’s two most recent posts—the one about escaping from Belize and the one that frantically tries to explain the GPS tag—have disappeared as well.