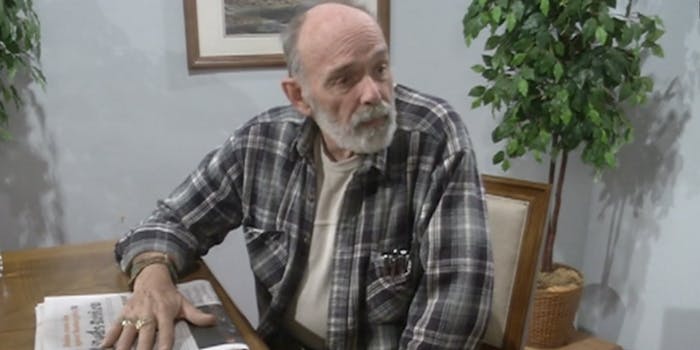 'The bad boy is here,' he messaged to who he thought was a 14-year-old girl.

The 71-year-old mayor of a southern Oregon town said he’s finished with Facebook after he was arrested for allegedly setting up a sexual rendezvous with a 14-year-old girl online who turned out to be an undercover cop.

Kenneth Barrett told the Oregonian newspaper that he deleted his social media account following the police sting on Sunday that forced him from office in Winston and made him an instant pariah in the small rural community.

“I believe that I’m a victim of entrapment,” said Barrett, who resigned as mayor on Wednesday after only two months on the job. “I’ve lost all my friends and this has all been really devastating for me.”

Claiming that his arrest was based only on “innuendo” and a nonexistent “14-year-old young woman,” the pervy public servant insisted that he had not been seeking sex with a child. “It was a stupid thing I did, but I’m a curious person,” Barrett told the Oregonian. “I can tell you that if I were really out trying to find someone to have intimate relations with, it wouldn’t have been with a kid.”

In an interview with the News-Review of Roseburg, a local paper, he claimed that he was simply trying to help a troubled teen. “The supposed girl talking with me said that she was being held hostage by her mother and her aunt,” Barrett said.

Court records, however, provide a decidedly different — and far more damning — account of his attempted encounter.

According to a probable cause affidavit, Barrett on March 5 began swapping steamy Facebook messages with an undercover cop who posed as the girl as part of an operation to identify adults who solicit sex with children. During two weeks of exchanges, the elderly man made sure to mention multiple times that he was the mayor of Winston and at one point described himself as being  “71 with the mind of a 17 year old and the energy of a 12 year old,” the affidavit alleges. He also sent selfies to his online Lolita, said that he loved her, requested that she write him sexually explicit poetry, and asked if she wanted him to be a “bad boy or a granddad.”

Barrett repeatedly talked about sex, court records show, and grew excited when he learned that girl he thought he was messaging on Facebook was a virgin. At one point, he told the 14-year-old that he would seek a divorce from his wife. Barrett then fantasized about ways in which the pair could consummate their budding online relationship, the affidavit said. They could meet in a park, perhaps. Or travel to Mars to populate the planet together, the mayor later mused.

“[We could] fly to the north pole and visit Santa in his hot tub naked,” Barrett also suggested, according to court records.

Eventually, Barrett settled for the girl’s address and offered to bring her some pizza and beverages, the affidavit alleges. They then planned for him to show up at her house in nearby Myrtle Creek while her mother was supposed to be at work.

“The bad boy is here,” Barrett allegedly messaged his paramour when he arrived at the home in his pickup on Sunday. He was instead greeted by a police officer in a patrol car. Barrett later told the cops he was there to meet “a lady” and buy her a pizza, police said. He also admitted to having a 9mm handgun without a concealed weapons permit in his truck.

The mayor was lodged in the Douglas County Jail and released on Tuesday, the Oregonian reported. Barrett faces second-degree online sexual corruption and unlawful possession of a firearm. He told the Oregonian that he was relieved to no longer be the mayor of Winston, a town of about 5,400 in Douglas County. Barrett then told then paper that to celebrate he was smoking a cigar and eating Chinese food with his wife at home.