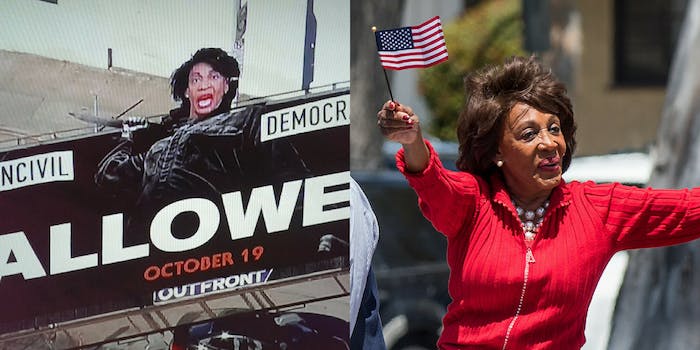 He owned the libs with a bad arts-and-crafts project!

Political art is about challenging the status quo and really making people think about the decisions of the politicians they’ve elected to represent them.

Which is why someone decided to make a totally not immature or pointless statement by sticking California Rep. Maxine Waters‘ head on fictional Halloween murderer Michael Myers’ body, between the hashtag #UncivilDemocrats. Take that, the Libs!

According to the Hollywood Reporter, conservative “street artist” Sabo defaced a billboard promoting the new Halloween reboot by swapping Myers’ image for Waters’ in the middle of the night. Sabo told the Reporter the “civility” hashtag was a callback to a speech she made in June, during which she told the audience to confront President Donald Trump and his cabinet members in public.

“If you see anybody from that cabinet in a restaurant, in a department store, at a gasoline station, you get out and you create a crowd,” Waters said at the time. “You push back on them and you tell them they’re not welcome anymore, anywhere.”

Despite Republicans’ resulting outrage over Waters’ call to action, the Reporter erroneously reported that Press Secretary Sarah Huckabee Sanders and Homeland Security Secretary Kirstjen Nielsen were confronted in public following her speech. They were actually confronted before Waters spoke out, and therefore not as a result of Waters’ speech. Senior adviser Stephen Miller, former EPA secretary Scott Pruitt, Sen. Mitch McConnell, among others, have all been accosted in public since Waters’ spoke out.

Sabo previously targeted Waters in May when he posted several signs calling for her impeachment, calling her a “race baiter, old and out of touch, poverty pimp.” Not racist or ageist statements at all. Photos of the signs were posted to his Facebook and Twitter accounts, which have both since been removed from their platforms.