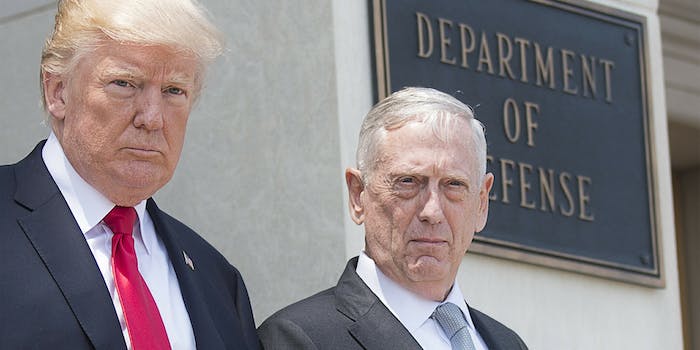 Despite what other outlets are reporting, Mattis' latest statement doesn't differ from Trump's.

In light of receiving the White House’s guidelines on a trans military ban, Defense Secretary Jim Mattis said he will let trans troops continue to serve while he awaits the results of a study on transgender service members.

“Once the panel reports its recommendations and following my consultation with the secretary of Homeland Security, I will provide my advice to the president concerning implementation of his policy direction,” Mattis announced in an official statement on Tuesday. “In the interim, current policy with respect to currently serving members will remain in place.”

While policy “remaining in place” may sound different from President Donald Trump’s trans military ban guidance—or that it freezes his ban altogether—it does not. Under Trump’s directives, the transgender military ban and the official halt on gender confirmation surgery funding, wouldn’t go into effect on March 23, 2018 anyway. The White House memo also says the defense secretary is to send an implementation plan by Feb. 21, 2018, which is what Mattis is working to do with the study. This plan will advise “as to what steps are appropriate and consistent with military effectiveness and lethality, budgetary constraints, and applicable law” regarding transgender troops in the military.

“Until the Secretary has made that determination, no action may be taken against such individuals under the policy set forth in section 1(b) of this memorandum,” the White House memo states. Section 1(b) refers to the official rollback on transgender service members.

Did no one really read this part of the trans ban order explicitly directing Mattis to do exactly what he said he's going to do? pic.twitter.com/UP7yAeyD4Q

In the defense secretary’s official statement, Mattis said the department will “carry out the president’s policy direction” and that the department will create a study and implementation plan “as directed” by Trump’s memo. Mattis also announced that he will issue “interim guidance” to the military regarding the president’s memo in the meantime, which means the trans military ban could be implemented in incremental steps depending on Mattis’ conclusions.

“I expect to issue interim guidance to the force concerning the president’s direction, including any necessary interim adjustments to procedures, to ensure the continued combat readiness of the force until our final policy on this subject is issued,” Mattis said.

A highly cited RAND Corporation study previously concluded that transgender troops bring a negligible effect to the U.S. military in both combat readiness and military spending. But Mattis previously expressed skepticism toward that study’s conclusions, according to the Washington Post, indicating he may be interested in research that leads the Pentagon to an alternate conclusion on transgender troops’ military impact.