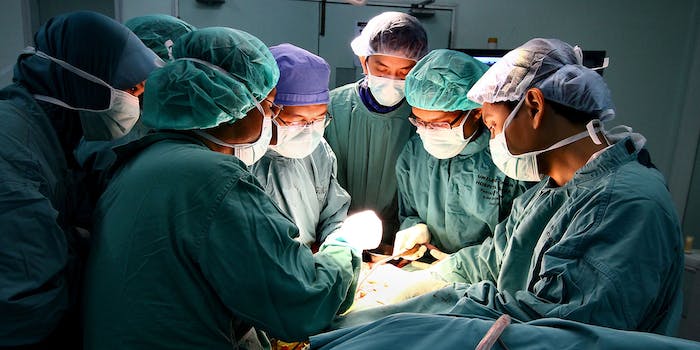 Matt Diaz bears all, including his internal organs, to the world.

Yesterday a woman gave birth on Facebook Live—and today a man has undergone cosmetic surgery for all the Internet.

In the video, shown on Buzzfeed Video’s Facebook page, surgeons lift extra skin from Matt Diaz and reduce his chest size after he lost more than 270 pounds in recent years.

About an hour after the livestream was posted, the video was already up to nearly 600,000 views and over 3,900 likes.

Comments during the surgery ranged from the incredulous to the completely grossed out.

During the live video feed, the surgeon, Dr. Matthew Schulman, said that Diaz’s story was “touching.” Diaz wrote on his website that he grew up in Brooklyn, New York, and was often the victim of bullying because of his weight.

By the age of 16, I weighed close to 500 pounds as a result of a sedentary lifestyle and a constant need to see if the new Ben & Jerry’s flavors were delicious. (Pro tip: They’re always delicious. Those people are geniuses.) After joining a study at the NYU Medical Center to see how the Lap Band would affect people under the age of 18, I committed to living a better life; not just to lose the weight and eat healthier, but to be a more social and healthier human being. After six years, I’ve lost nearly 270 pounds and I’ve never felt better.

On March 16, 2015, Diaz uploaded a video showing his excess skin, with a message of positive body acceptance. That video went viral. Diaz wrote, “Thousands of messages were sent to me through Facebook, Tumblr, and YouTube about their similar experiences, including the transgender community, as well as women who’ve experienced childbirth. These are just two groups of many who’ve come out to say that I wasn’t alone. Excess skin is a specific problem, but body image issues resonate with everyone.”

Through a successful crowdfunding campaign, Diaz was able to raise the money needed for the surgery to remove the excess skin, plus more. He explained on his site:

I was able to get my procedures done for a greatly reduced price, so I took what I didn’t use to pay for medical care or unforeseen expenses and donated it to other people in my situation. I donated $5,000 to a girl I met on the Meredith Vieira Show in the same situation as me, and another $5,000 to a trans dude to help fund his chest surgery. The rest was spread out among anonymous donations on GoFundMe and YouCaring pages over the past few months.

Glad it all worked out for the best! Here’s to a speedy recovery, live-surgery dude!