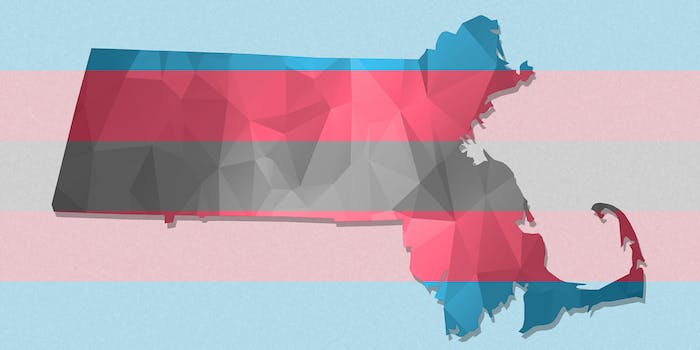 68 percent of Massachusetts voters stood with transgender people on Tuesday.

Massachusetts voted yes on a ballot initiative to uphold protections for transgender people on Tuesday.

The state initially passed its transgender anti-discrimination law in 2016 with overwhelming support in the state House. Though it was petitioned and put on the 2018 ballot, voters showed support for the law and it will continue to protect people from discrimination on the basis of their gender identity in any public accommodation, including bathrooms and locker rooms.

While for many, these changes made Massachusetts a safer, more comfortable place to live, there were people who organized against the anti-discrimination law. An anti-trans group called Keep MA Safe gathered signatures on a petition to put a repeal of the anti-discrimination law to a vote in the midterm election. Massachusetts, being the first state to legalize gay marriage in the United States, is considered by some to be a key battleground for civil rights, giving a repeal the potential to be a lightning rod for similar moves across the country.

However, in the end, the repeal campaign was for naught; the people of Massachusetts voted to keep the transgender anti-discrimination law in place. As the polls closed and the good news was confirmed Tuesday night, transgender people and their allies celebrated the win online.

Congratulations to the @Freedom_Mass Yes on 3 team who helped preserve the basic dignity of transgender Americans by an overwhelming 2-1 majority.
We should have never had to fight to defend our rights.
But we did.
And we won.
It was an honor to campaign with you.#NOH8 pic.twitter.com/5RE6pSd6sT

Massachusetts tonight you sent a message to the administration & to the country that #TransLivesMatter.You chose love over fear. So many activists & organizations worked to make this possible.Thank u @Freedom_Mass @SUSORyley @chasestrangio @ACLU, to name but a very few. #YesOn3

hi. im a transgender youth in Massachusetts and i voted #YesOn3 . i just saw our victory and i be crying at the ballot box tonight folks!!!!! SO fucking happy we made it.

Tonight, advocates in Massachusetts secured the first-ever statewide ballot initiative to protect the rights of transgender people. I am inspired + grateful for their hard work. They’ve given us all something to further build upon. I am proud to be a transgender woman.#YesOn3MA

While cities have done similar repeal votes, Massachusetts is the first state to put such a law to a vote. With 68 percent of voters choosing to keep those protections in place, it may foretell good news if such ballot measures happen in other states.