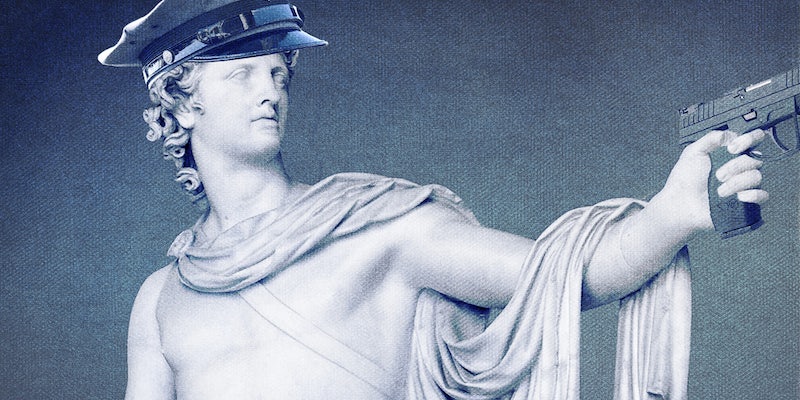 The Masonic Fraternal Police claimed to be a 3,000 year old organization that precedes US law enforcement.

That’s a line from the website of the Masonic Fraternal Police force, an organization that claims to be the world’s oldest law enforcement agency serving 33 states, Mexico City, and about half a million people.

The most shocking discovery wasn’t that a secret Masonic police force exists, but that one of its higher-ups is a staffer at the office of California Attorney General Kamala Harris. According to the Los Angeles Times, which broke the news, Brandon Kiel is now on administrative leave from his job as deputy director of community affairs at the California’s justice department.

While the Masonic cops do have some legitimate connections to law enforcement, at least through their day jobs, the claims on their website are already being quickly debunked by curious newshounds doing on-the-ground investigations.

The Masonic cops claim to be direct descendants of the Knights Templar, the medevial SWAT teams that fought in the crusades. But they are also just one of hundreds, perhaps thousands, of freemason groups in the United States. A Wikipedia list of Masonic Grand Lodges worldwide lists over 100 in the U.S. and states that each Grand Lodge oversees jurisdiction for up to hundreds of smaller local sub-lodges.

According to the Annual Conference of Grand Masters of Masons in North America, there are some 2 million Freemasons on the continent. While it’s hard to verify the exact membership data of a massive secret society, the conference numbers would support the Masonic Fraternal Police website’s claim of overseeing security for about half a million people.

Complicating the issue is the fact that private police forces exist—and are legal—in America. Privatization of police and security forces is increasing, with businesses and college campuses hiring their own private police to serve and protect.

In some states, all it takes to start your own police force is a quick petition to the state court. As the Washington Post reported this February, Virginia’s numbers of “SCOPS,” or Special Conservators of the Peace, doubled over the past 10 years and currently count 750 among their ranks. Each private cop carries a badge, a gun, and can make arrests.

It raises a necessary question: If private police forces are legal, why were the Masonic Cops arrested and charged with impersonation? After all, the massive network of Freemason orders really have been around longer than the Los Angeles Police Department. If colleges, businesses, and gun-toting Virginian vigilantes can legally make arrests, why can’t an order that has counted George Washington, Winston Churchill, Henry Ford, and Theodore Roosevelt among its members?

All three arrested in association with the case are Africans-American, and other photos of the Masonic Fraternal Order of Police seem to indicate a primarily black-led membership. Perhaps the idea of a private, black police force was more than the Los Angeles sheriff’s department was prepared to accept.