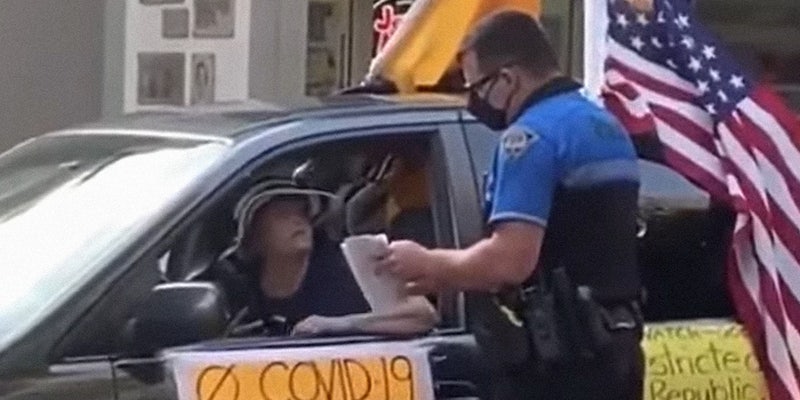 A maskless Karen was captured on camera yelling at a Greenville, South Carolina, police officer near downtown, after receiving a ticket for an “anti-vax” sign that was blocking her window.

The officer already has her pulled over and is writing out a ticket when the recently viral video begins. The woman, whose van has a visible sign that reads “0 COVID Testing, 0 COVID screening,” attempts to read the officer’s badge number, but cannot: “OK, you read it to me, I don’t have my glasses on. Don’t leave until I can read your badge number.”

To this statement, the videographer provides a deep, hearty laugh, likely at both the woman and the comment noting the southern city’s changing politics.

She continues her “Karen” entitlement, going on with a self-righteous screed: “I am not disorderly. I have freedom of speech. You’re being disorderly. In my day and age, you were called officers of the peace—I was peaceful.”

She finally reaches for her glasses to read his badge number, reading it out in public. She says she’s being charged for having an anti-vax sign in her window. But she claims people “can’t see out of work vans either.”

To that, the videographer yells, “nobody cares, you’re annoying.”