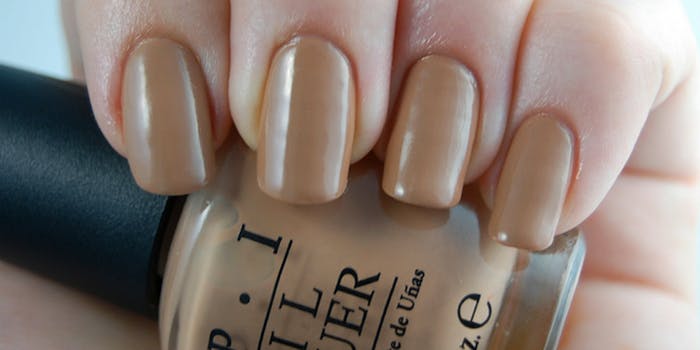 “How to pull off the ugliest fall nail colors” showed a tone-deafness on race.

One manicure trend that’s classic for fall: the look known as “mannequin hands.” And the success of mannequin hands depends on being able to find a nude shade to match your individual skin tone. So more variety of nude shades is a good thing, right? Not so much, according to one Mashable article (which has since been edited to omit the offending content).

Obviously you don’t want to wear the bathroom on your nails, but don’t flush this trend down the toilet just yet. Brown is a staple fall color. Use the chocolate trend to your advantage and wear a rich shade that will supercharge — not drag down — your autumn-colored outfit.

-_- "@fangirlJeanne: In which @mashable is the worst. "Poopy brown?" Seriously? Wow! pic.twitter.com/mSVwNQv54y"

Compounding the offense, Mashable tweeted a picture of the four brown polishes from the piece:

How to pull off the ugliest fall nail colors. http://t.co/T7poFISf7e pic.twitter.com/HgMoSW06Zq

The incident starkly highlighted how beauty writers—especially white beauty writers—often fail to consider an audience that doesn’t share their light skintone. Brown may be a less common color in general in the vast rainbow of nail polish shades, yet its is the skin color of billions of people on the planet and many of them shop for makeup that complements their skintone. By equating brown with “poop” and calling it ugly, the writer Hayley Wilbur, an intern at Mashable, at best failed to consider that people with dark skin buy nude nail polish, too. (Neither Mashable nor Wilbur responded to a request by the Daily Dot for comment.) The blog Clutch pointed out suggested this incident highlights the need for media outlets to hire more writers of color.

This sort of casual racism plagues the beauty and fashion industries. Makeup artists tell black women they can’t wear nude lipsticks. Undergarments and hosiery are so hard to find that a specialty company, Nubian Skin, was founded by Ade Hassan to fill the market gap. In 2013, luxury shoe label Louboutin made the nude shoe trend more accessible by launching “5 Shades of Nude” to include darker skin tones. And this fall, though the color wasn’t included in Mashable’s lineup, Louboutin has worked to expand its nude nail polish range with darker shades like cappuccino and chocolate brown.

Karen Chambers, director of product development at Iman Cosmetics, spelled out the issue for Racked.com in an article earlier this year:

“In the beauty industry, brands often divide skin tones into two categories: ‘general’ and ‘ethnic.’ There is not a broader sense of inclusiveness that recognizes that women are really a single category.”

Many Twitter users, particularly black women, criticized Mashable’s article and tweet. At this time, Mashable has left up the tweet but delete the entire section on brown polishes from the article without an update or explanation.

Wilbur, the author of the piece, has since made her Twitter feed private. However, a cached tweet from Sunday shows that she tweeted the comment “people always try to find controversy.”

This story originally included a section about brown nail polish that many found to be racially insensitive. We agreed with those concerns and have since removed that portion.

Readers have rightly raised concerns about a racially insensitive portion of an article on nail polish. We have cut the section & apologize.

Photo via evhoffman/Flickr (CC by 2.0)