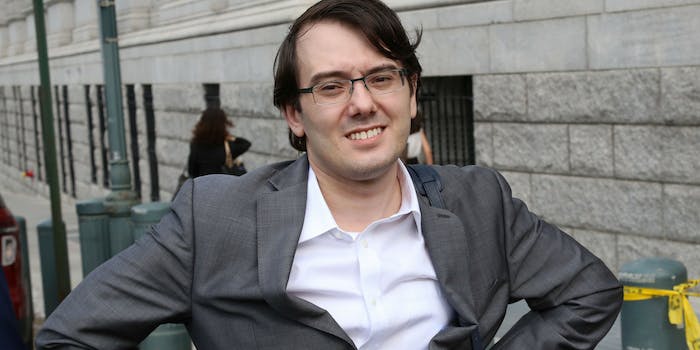 Pharma bro is up to his bulls**t again.

For months, Martin Shkreli has been sitting on several domain names of journalists who have reported on his “celebrity”—from his pharma-bro price hike of an HIV drug, to his fraud conviction, to his obsession with rare rap albums. Now, he’s finally putting those domains to use in a manner that, unsurprisingly, harasses the domains’ namesakes.

According to Business Insider, Shkreli has published mocking welcome messages to the domains he owns for Vanity Fair tech reporter Maya Kosoff and CNBC editor Caroline Moss. Kosoff’s welcome reads, “Here we honor one of the most vibrant Social Justice advocates today.” Meanwhile, Moss’ page reads, “Everything you need to know about this CNBC safe-spacer.”

However, a recent visit to the older domain names (ex: Maxnisen.com, maxwelltani.com, etc.) as well as a visit to the domain he bought to target Duca (marrymelauren.com) now lead to a GoDaddy redirect to purchase the domains.

Speaking to Business Insider, Shkreli dismissed Kosoff’s and Moss’ work, and said they were “only a few notches above the white supremacists we hear so much about these days.”

“I wouldn’t call these people ‘journalists.’ They are the unwitting recipients of liberalism subsidy from large media and telecom companies,” Shkreli said.