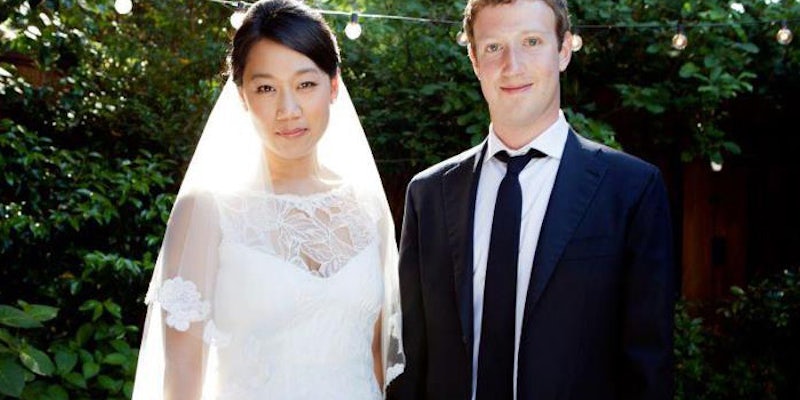 The Facebook founder married his longtime girlfriend, Priscilla Chan, on Saturday, capping off the best week ever.

<Every day, the Daily Dot finds something that people on Facebook are sharing and, in turn, shares it with you—with a little explanation. Here’s today’s share.

Facebook founder Mark Zuckerberg had a pretty good weekend. The day after becoming a billionaire 19 times over by making his company public, he married his longtime girlfriend, Priscilla Chan on Saturday.

Though the marriage is unavailable as a share, more than a million users have liked the news on Facebook. (Zuckerberg is one of Facebook’s most-followed people, with 14 million subscribers.)

The timing seems to have largely been accidental. The wedding date had been set for months—based not on when the company would go public but for soon after Priscilla finished medical school.

While a few commenters offered up snark (“Prenup? Justsayin’,” Maitland Waters wrote), the vast majority either offered simple congratulations or praised it as a classy move.

“That is smart investment that will pay real dividends. Congrats!” Steve Farnsworth added.

“This is the way real men celebrate success, making a commitment to someone you love,” Christopher London noted.