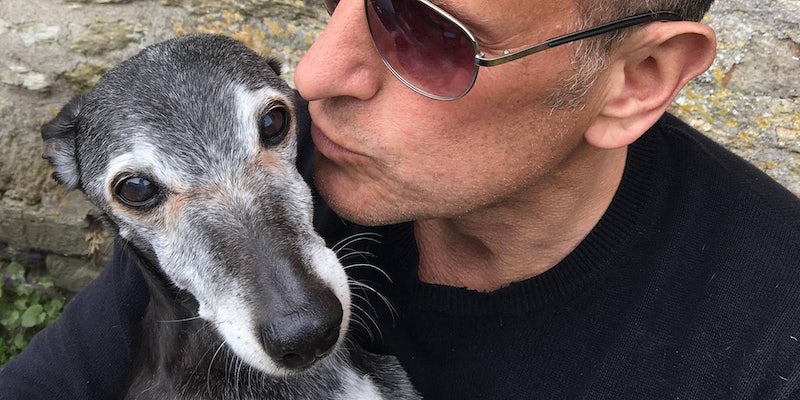 Strangers across the world took a #WalkWithWalnut in solidarity.

Putting down a pet is extremely difficult, but hundreds of people made that journey easier for one man in Cornwall, England.

On Saturday, dog lovers from across the U.K. joined Mark Woods and his Whippet named Walnut for the dog’s last walk on Porth Beach.

Though Woods shared 18 years with Walnut, the dog’s health had deteriorated over the past few months, and he was having difficulty eating and walking by himself. It was then that Woods made the decision to put his beloved pet to sleep.

Having set the date for Walnut’s euthanization for Saturday, Woods shared an impassioned plea on Facebook for people to join them on their final trek together that morning.

It didn’t take long for Woods’s story to go viral. Hundreds showed up on the beach and Woods told Pirate FM that he received supporting messages from people all over the world—people who couldn’t be there with Walnut even told him they’d be walking their own dogs at the same time in his honor.

Walnut’s story traveled through social media with the hashtags #WalkWithWalnut and #WalnutsLastWalk.

Mark Woods says a huge thank you to hundreds of people who turned out to walk with him & Walnut today on their last stroll #walkwithwalnut pic.twitter.com/tbDKfogG70

After the final walk, Woods posted on Facebook that Walnut had been put to sleep just hours later. Walnut died surrounded by his family in Woods’s arms.

Though Walnut is no longer with Woods, his legacy lives on. Ethical Record Label released the charity single “Walk With Walnut” by Gee Kenny, with 100 percent of the proceeds going to the Battersea Dogs and Cats home.

“Thank you to the hundreds of people that attended the walk this morning and to all those that had their own walks with their beloved pets…” Woods wrote on Facebook. “I also want to thank the wonderful people of Newquay for their support which I will never forget as long as I live.”