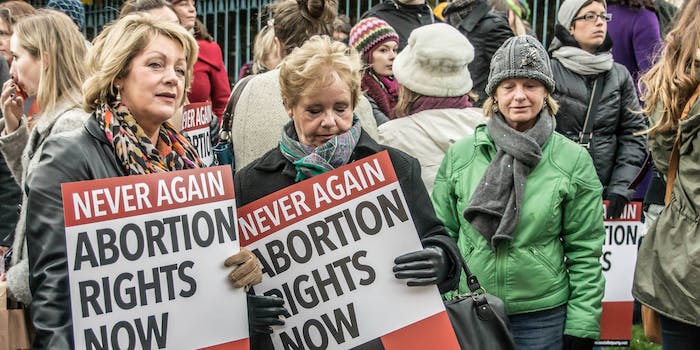 It's struggling to meet demands brought on by Ireland's strict abortion laws.

The U.K.’s largest abortion provider says it must temporarily turn away Irish women from clinics in order to accommodate high demands.

According to the Independent, a spokesperson from family planning charity Marie Stopes International said they will be prioritizing U.K.-based clients referred to them through the National Health Service. Irish women will be referred to another abortion provider, the British Pregnancy Advisory Service—though BPAS is reportedly struggling to meet demands, too. Clients who have already booked appointments for Marie Stopes will be treated, however.

“We’re looking at our capacity across the country. Irish women may have to go to slightly different locations to access our services,” a Marie Stopes spokesperson told the Independent.

Another spokesperson told the Times that January and February are the busiest times for the charity, and they’re referring the women to other providers in an effort to have them treated quickly. Women unable to find a secondary provider during this time are advised to call the Marie Stopes helpline.

Because abortion is illegal in Ireland, except if the pregnancy endangers the woman’s life—medically induced abortions are only legal for pregnancies up to nine weeks in Northern Ireland—women often travel to the U.K. for the procedure, paying for airfare, hotel accommodations, and the procedure out of pocket. (The NHS provides free abortions, which Irish woman do not qualify for as they are not U.K. citizens.) In 2015, more than 3,400 Irish women and 833 women from Northern Ireland traveled to the U.K. to have an abortion.

Opponents of Ireland’s restrictive Eighth Amendment on abortion argue that the article discriminates against women and their right to healthcare. In November 2012, at least 10,000 pro-choice protesters marched in Dublin, calling for abortion law changes and holding a vigil after 31-year-old Savita Halappanavar died from complications from her miscarriage when doctors denied inducing an abortion. Though Halappanavar admitted herself to the hospital during her miscarriage, the fetus still had a heartbeat, rendering the abortion illegal.