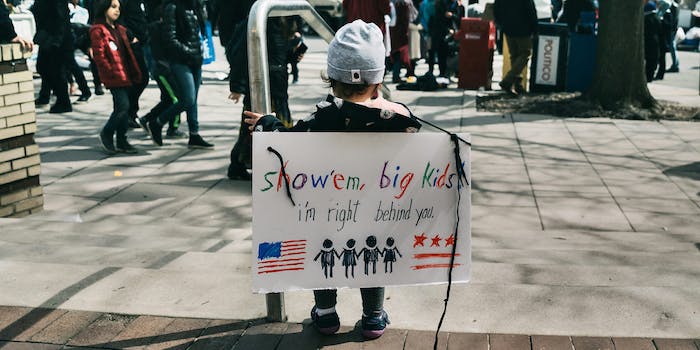 March for Our Lives gives me hope for the midterm elections

The young people are ready to 'vote them out.'

Standing in a crowd of around 175,000 in Manhattan on Saturday for the student-organized March for Our Lives, I felt admiration for the generation stepping in to fix a system they’d had no hand in breaking. I felt a fragile prickle of hope that a rising tide of energized voters might sweep in at just the right moment, as voter registration stations dotting the route were ready to sign up rally-goers about to turn 18. I felt a rare moment of optimism about our political future, thanks in whole to the nation’s teens.

But I also felt a little bit sad. After they corralled more than 200,000 people at the main rally in Washington, D.C., and coordinated some 800 satellite marches around the world, it was clear that these kids are miles more capable than the fully grown politicians who’ve fallen down on the job. But they shouldn’t have to do this.

Originally the brainchild of Parkland student Cameron Kasky, March for Our Lives represents a direct response to the Feb. 14 shooting at Marjory Stoneman Douglas High School. With the same semi-automatic weapon (an AR-15) used in legion school shootings past, gunman Nikolas Cruz opened fire on his former campus and killed a total of 17 students and staff members. At the New York City rally, MSD student Meghan Bonner tearfully recalled what happened after she was finally evacuated from the classroom where she and her peers had been hiding that day. When a police officer told her that Cruz was the shooter, Bonner said she “wasn’t surprised.”

“I was 15 years old when I knew Nik Cruz wasn’t OK,” she continued. “The first time I spoke to him, I knew something was wrong with him and I know I’m not the only one who felt this way.” Her friends reported his threatening behavior multiple times, she said, and nothing was ever done.

In the aftermath of the Parkland shooting, politicians’ predictable thoughts and prayers rang hollow as more details emerged about just how little had been done: The FBI had received reports about Cruz’s potential for mass violence, but every time, declined to pursue them. Bipartisan legislation proposed in the wake of October’s Las Vegas shooting that left 58 dead, which would’ve banned the bump stocks that transfigure a semi-automatic into an automatic weapon, died quietly in Congress as other issues hijacked headlines. In Parkland’s wake, the timely reminder that a huge percentage of lawmakers (largely, but not entirely, Republican) runs on funding from the National Rifle Association suggested one possible explanation for their consistent inertia on the issue. Parkland students called bullshit on all of this, launching a long-overdue push for firearm regulations that haven’t materialized in decades’ worth of mass shootings.

“The adults failed us, and now 17 people are dead,” Bonner said. “14 kids I saw every day from elementary school until middle school and then high school, who are never going to live the life I have the privilege of living. …There is so much more that could’ve been done to prevent this. I want to see change. I don’t want to feel unsafe in school anymore, I want to see change.”

Today we #MarchforOurLives in solidarity with our fellow New Yorkers, the students of Marjory Stoneman Douglas High School, and everyone throughout the country who has said: #Enough. See more photos from #MarchforOurlivesNYC and Long Island in our InstaStory ☝️

Onstage and in the crowd, Bonner’s peers echoed that sentiment. When I spoke to young attendees on Saturday, I consistently met articulate opinions rooted in close personal concerns. Two 20-year-old NYU students, Christy Welch and Jaye Sosa, told me that, while gun violence definitely has a presence in the city, they are keeping the other communities they belong to in mind.

“The fear that I usually have is not me living in the city and being scared of gun violence, but more thinking about the people back home,” said Sosa. “I come from a largely Latino community in Southern California, and my school actually just got on lockdown last week. I fear for the college that my dad teaches at, because he teaches at a community college.”

The threat of gun violence is not confined to schools, though, and looms as something more existential. The shooting at Orlando’s Pulse nightclub in 2016, for example, also weighed heavy on Sosa’s mind: “As someone in the LGBTQ community, I was really triggered by that and definitely had nightmares of being somewhere and getting shot because of who I am.”

The solution, as Welch and Sosa saw it, did not involve more guns. Instead, it involved more stringent background checks—an issue on which Congressional Republicans, especially, have stumbled—and a civilian ban on military-grade firearms. And while some have proposed arming teachers as a means of scaling back violence on school campuses, Welch noted that “untrained people in a situation of panic would not be able to respond effectively,” and rather than disarming a shooter, would probably just add to the injuries and the chaos.

Welch also noted that, if guns do in fact kill as many people as cars, we should probably start taking a gun license as seriously as we do a driver’s license. “We have to register cars with the state, we have to have a government-issued license, we have to do driver’s training and a certain number of hours on a permit” before we can legally drive, she explained. “There are so many steps to be able to get a license and be able to drive a car, but you can just take a quick not very thorough background check and get a gun.”

Mikko McGregor Corson, a 15-year-old freshman from Millburn, New Jersey, said that while his high school holds occasional shooting drills, he doesn’t feel immediately unsafe in his classroom—but he definitely wouldn’t feel better knowing his teachers toted guns. His mom, Jennifer McGregor, is a nursery school teacher and administrator, whose job obligates her to run regular lockdown drills with her pre-school students. “That shouldn’t be something you need to explain, that shouldn’t be something you need to explain to a two-year-old,” Mikko says. “It’s not something that kids should be dealing with.” Yet here we are.

“My whole life, there have been school shootings,” he said. “It has been 19 years since Columbine, and it’s become so normalized, and I think that’s ridiculous.” While his school has beefed up security, the thing that would actually improve his learning environment had less to do with his individual campus, and more to do with policy: “If we had more rules about guns and we knew that it would be a lot harder to illegally get guns and come in and shoot us,” he explained, “that would make me feel a lot safer.”

A 16-year-old named Mya, who goes to high school in upper Manhattan, expressed similar misgivings about guns in the classroom. “I believe if you give teachers guns, it would cause more violence,” she said. “You don’t know how teachers will react towards it—if they’re ready, prepared.”

Mya’s school already has metal detectors, and she doesn’t feel particularly threatened: Her teachers often step in when a student is getting bullied, and when I asked her what she thinks might help improve safety, her short answer was empathy: Try to talk more to the kids who are on their own and include students who are being alienated by their peers. “I think you can resolve it with kindness, not with guns,” she said. Guns only “[make] the situation more dangerous.”

While what motivates a school shooter is more complicated than being an outcast or a “weirdo”—and often includes learned and reinforced hate—these young protesters’ straightforward, common sense solutions are still much more practical than what lawmakers have proposed, all of which is equal parts frustrating and baffling. That young people seem to be thinking more actively than lawmakers about America’s gun violence epidemic is unfortunate, if not entirely unsurprising, though: Children, teens, and adolescents are immediately affected by the free availability of artillery, and unlike many politicians, aren’t given a financial incentive to look the other way.

But that raises another, no less pertinent problem, one that Columbia University senior Nza-Ari Khepra highlighted in her address on Saturday. Khepra helped found the structural violence awareness campaign Project Orange Tree after her friend, Hadiya Pendleton, was shot and killed in a Chicago park in 2013. Pendleton was 15 years old at the time, a volleyball player, an honor roll student, and a drum majorette coming off a performance at President Barack Obama’s second inauguration. Now, Khepra said, “Hadiya is remembered with the sound of a gunshot,” while Chicago’s “young people are becoming first responders.”

“You have a city full of children who aren’t allowed to be young because they’re working to solve issues that adults and lawmakers should be [solving],” Khepra stressed.

Make that a nation full of children. The March for Our Lives organizers pulled off an incredible feat: I have never attended a march that stuck so closely to schedule, and that seamless choreography was all the more impressive for the broad spectrum of voices who took the stage. Some of these were “old people” from the organizations that partnered with March for Our Lives; most of them were not—indeed, the youngest speaker to address the crowd clocked in at just 11 years old.

“It makes me feel bad that an 11-year-old needs to get up there,” remarked the person standing behind me as Christopher Lane’s voice boomed out over the loudspeakers. My sentiments were similar when looking around at all the 7-year-olds who, rather than spending the first Saturday of spring—a pocket of sunny weather days after an incongruous March blizzard—playing with their friends, found themselves marching on a government inexplicably loath to represent their interests.

The roots of student activism trace way back, of course: Teenagers have proved ready and able agents of political change at least since the Civil Rights movement, and so I do not mean to say that they should stop now. They should absolutely stay involved and active, and as the organizers continually pointed out, a healthy democracy rests on people exercising their right to dissent.

Rather, I mean to say that people who have not yet been permitted the right to vote should not have to take up the congressional slack. I mean to say that lawmakers great and small need to step up and do their jobs now. They need to listen. Not even four months in, and 2018 has already seen 50 mass shootings; firearms have killed over 3,000 people and injured nearly 6,000 more so far. This has been going on long enough that we have the data: We know that expanding concealed-carry policies only means more crime; we know that people don’t typically use guns to stop gun violence; we know that mass shootings still happen in the vicinity of armed authorities, just like at Parkland; we know that while mental health problems are not confined by U.S. borders, but mass shootings overwhelmingly are.

And so, frustrated as I am that young people must now do the government’s job for them, I was also heartened to see so many busy volunteers signing up a new generation eager for change. I can easily envision an immediate future in which Congress continues to drag its feet on gun safety. But I can just as easily see a bipartisan refusal by a newly enfranchised generation who meant Saturday’s rallying cries sincerely: “Vote them out.”