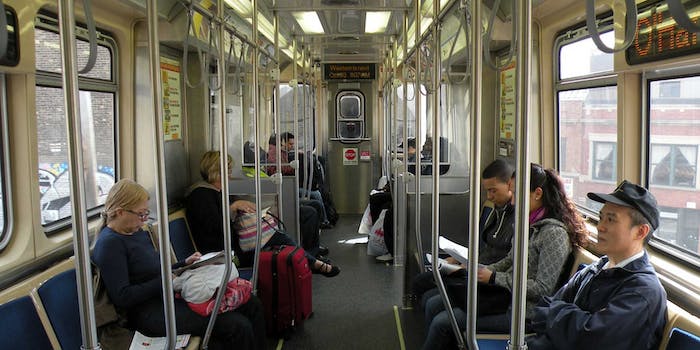 These awesome ads shame people who are jerks on the train

Rule number one of riding the subway: Please just don't be a d**k.

The Chicago Transit Authority wants you to stop being a dick on the train. Manspreaders, loud-talkers and music-blasters, look out: You’re about to be hardcore shamed by a new CTA “courtesy” campaign aimed at rude passengers.

Why aren’t you letting pregnant women sit down? Why are you knocking people over like bowling pins? Why are you having a four-course kimchee meal in cramped quarters? The campaign wants to make riders reconsider everything they thought they knew about subway etiquette.

“There are certain behaviors that the CTA certainly can and does regulate,” Garfield said, referring to potential fines that violators face for smoking, littering and damaging CTA property. “There are other things where people just need to get along and offer consideration to fellow riders.”

These ads come at a time when shaming people on mass transit has reached a fever pitch. While the CTA hasn’t yet come out with a specific ad targeted at “manspreading,” or adopting an extra-wide stance while seated on the New York City subway, both Tom Hanks and Matthew Broderick have been called out for the practice. The NYPD has apparently even started arresting manspreaders on the New York City subway.

That said, lots of people don’t think manspreading is that big a deal. When asked about his own subway etiquette, Hanks had a message for the peanut gallery, which could also apply to the CTA:

But if you have any further questions about what constitutes good and bad behavior on the subway, you can always look to the true model of grace and courtesy on the train: Dame Helen Mirren. She’s always a queen, both above and underground.