It was all because of the food blogs…

One blogger's descent into Thanksgiving madness (thanks to the food blogs).

It is all because of the deleterious effects of the food blogs that early this morning you had to make the special trip to that hipster butcher shop, you know the one with the nice young men who have the arms full of tattoos and wear the ironic handlebar mustachios. Unfortunately, because of the food blogs, you had no choice. You had to pick up the organic, pastured, free-range, eighteen-pound heirloom turkey, which had been ordered directly from the farmer for your big Thanksgiving meal.

When you got to the check out counter, you were afraid to look while the Betty Boop-a-like girl in the polka-dot kerchief rang you up, so you just handed over your debit card and pretended to examine the copy of Adbusters.  It was one hundred and nineteen dollars and change. More money than you had paid for the past six holiday turkeys combined, all of them honest Butterball toms who had given their lives in noble service to gluttony and national pride.

You had not wanted to spend so much money on the bird, but two years ago it was your brother’s turn to host the family festival, and his wife (who is the adjunct professor of sociology down at the junior college) served the organic free-range turkey, which everyone, including your husband Gary, praised as “the best bird ever.”

What made this all so galling is that your sister-in-law has her own silly food blog, (silly, despite the fact that it was nominated for the James Beard Award for Excellence in Pornographic Food Photography, which it thankfully did not win) which means that on Friday morning the entire interwebs were treated to the large picture of Gary, fork in mouth, being transported in orgasmic ecstasy to the ethereal plane of turkey delight.  Tweeted and retweeted by the followers of your sister-in-laws blog, this photo of Gary had become, by the end of the weekend, its own meme, prominently featured above the fold on the Buzzfeed with the variety of captions, the majority of which were variations on the theme “Ermahgerd Terky!” 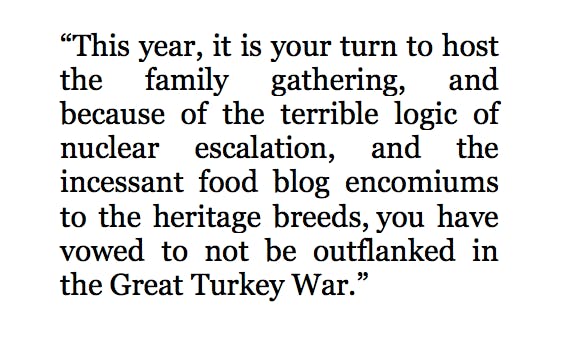 Unfortunately, that succulent, perfectly-cooked, flavorful white meat, and those pictures of Gary, were like shooting the Grand Duke in Sarajevo; suddenly, forces beyond the control of ordinary mortals had been roused to life.

The next year, when it was your sister Emily’s turn to host the dinner, she responded with the organic, free-range turkey, which she had brined for twenty-four hours, and stuffed with two(!) dressings: traditional bread crumbs for the body, made according to the accursed Pioneer Woman’s favorite recipe, and the special sage-and-chestnut dressing for the neck, prepared according to something from the Gourmet iPad app.

Your brother was effusive in his praise, and Gary had fifth helpings, which resulted in him afterwards plopping himself onto the couch in your brother-in-law’s den and groaning loudly during the Cowboys game, to the annoyance of your father.

“Daggummit, Gary, if you’re going to bellow like a bull moose in rut, why don’t you take your turkey-eating carcass out onto the patio, so’s I can enjoy my football game in peace.”

This year, it is your turn to host the family gathering, and because of the terrible logic of nuclear escalation, and the incessant food blog encomiums to the heritage breeds, you have vowed to not be outflanked in the Great Turkey War. Which is why this morning you paid nearly $120 for the muy rico, aristocratic free-range heritage turkey, who undoubtedly lived until his death in the little three-bedroom, Upper East Side turkey condo, enjoying the life of the rentier poultry class, playing tennis, collecting French wines, and being chauffeured around the farmyard in his little turkey Bentley.

It is also why you have spent the past six months teaching yourself molecular cooking from the bootleg copy of Nathan Myhrvold’s magnus opus, Modernist Cuisine. You are now officially all about the sous vide steak, the 63° centigrade egg, proteinaceous meat powders, and exotic vegetable foams. In fact, you have become so skilled in such the short time, that last week, when the New York Times ran the recipe for the deconstructed pumpkin pie, you were openly scornful.

Over the past months, as your cuisine has become more esoteric, the children have turned sullen and seem to be losing weight, and you suspect that Gary may be carrying on the illicit romance with the drive-up window lady at Arby’s, because on Friday you found receipts on the floorboards of the car for dozens of Bacon Beef’n Chedder Sandwiches.

You have decided, however, that all of this trouble on the home front is the small price to pay for total victory before Christmas.

Indeed, it has been several months in the making, but your triumph is at hand. The menu for your Molecular Thanksgiving Feast is finally set, and you can guarantee that it will knock the socks off of everyone there. (Take that J. Kenji Lopez-Alt –Jinglehammerschmidt!) Even your hard-to-please father, who loves Roger Staubach and candied sweet potatoes in equal measure, is sure to adore your version of the traditional side dish, made with West African taro powder and truffle marshmallow smoke.

But it will be that expensive turkey that will be the magnificent centerpiece of the meal, the thing everyone will be talking about for the years to come. And now, finally, you can begin cooking it. Everything is ready; the boning knives are sharpened, the water in the sous vide bath is warm; the centrifuges are spinning… ayyy!

You have forgotten the most important ingredient! It is not too late. Hurry! You can still make it to the chemical supply house and pick up that tank of liquid nitrogen before the place closes.

Oh, you can’t wait to put the pictures of everything up on your new food blog!

Author of Manolo’s Shoe Blog and Manolo’s Food Blog, the Manolo the Shoeblogger himself has been praised by authorities as various as the Wall Street Journal, Vogue, Fortune, the Sydney Morning Herald, the Guardian, and the master shoe designer himself, Manolo Blahnik, for his eccentric, erudite, and at times outrageous sense of humor, and for his extensive knowledge of shoes and fashion.