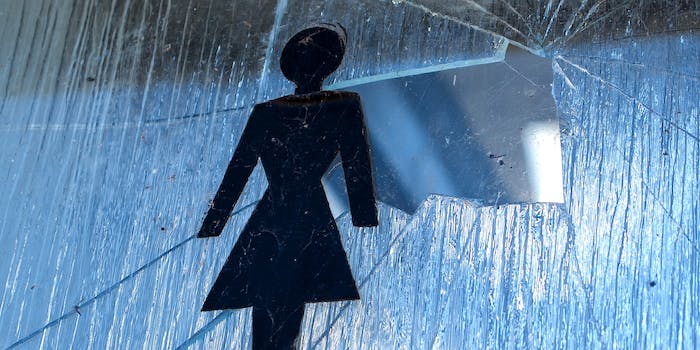 The Manchester attack was an act of violence against women

Nearly all the victims were female—as they are in most acts of mass violence.

The screams of teenage girls attending an Ariana Grande concert wouldn’t normally be a cause for concern, but Monday’s show in Manchester was anything but normal. A suicide bomber set off a homemade explosive device in the packed 21,000-capacity stadium, killing 22 people and injuring 59 more. Many of the concertgoers who fled the blasts were young women wearing Grande’s signature kitten ears, fighting a current of bright pink balloons to get to safety.

These surreal images—the innocence of teen life torn apart by terror—have devastated the United Kingdom as it grapples with the unthinkable bloodshed. The country has been placed on “maximum alert” as authorities anticipate the possibility of further violence. The man behind the horrific attack was a 22-year-old who reports indicate had become radicalized by ISIS, and the Islamic State has officially claimed responsibility for the bombing. The tragedy is one of nearly 600 terror attacks reported so far in 2017.

The portrait is a sadly familiar one, though, for the women and girls who are too often murdered in tragedies labeled as “senseless,” as if they defy any explanation. Although media reports often focus on those who perpetrate violence, there’s a clear pattern as to whom culprits target. According to Everytown for Gun Violence, 64 percent of victims murdered in multi-person attacks between 2009 and 2016 were women and children. Whether it’s being murdered by an intimate partner, a male classmate with a twisted worldview, or a suicide bomber, these victims lose their lives with numbing regularity, and yet we rarely discuss the reason why.

It was one of the most brutal killings in U.S. history, one you might not have heard about. Eight female nursing students living in a women’s dormitory in Chicago were tortured, strangled, and stabbed to death by a male intruder, Richard Speck, who snuck into their residence on the evening of July 14, 1966, intending to rob them. Speck, a Texas seaman who had “Born to Raise Hell” tattooed on his left arm, tied his victims up and sexually assaulted them at knifepoint. The 24-year-old had a history of violence against women. In addition to being questioned in the disappearances of numerous missing girls, Speck was also accused by his first wife, Shirley, of having raped her numerous times every day.

The Speck murders, although they’ve faded somewhat from public consciousness, provide a chilling look into how mass killing operates. The violent acts he committed were extreme and unthinkable—yet they have become a template for gendered violence in the decades since.

In 2015, a man shot up a Lafayette, Louisiana theater showing the Amy Schumer romantic comedy Trainwreck, a movie whose audience was predominantly female, killing two women. In 2014, a 22-year-old college student killed six people just off the campus of the University of California, Santa Barbara—he had planned to gun down a sorority house. In a video message posted to Facebook, he claimed that the act was “retribution” for the female attention that he felt he had been denied throughout his life.

Like Speck, these perpetrators engaged in repeated acts of domestic violence or abuse prior to the incident—even when the targets of the eventual murder aren’t female. The Orlando shooter’s ex-wife claimed that he victimized and abused her, while the ex-wife and daughter of the Lafayette gunman had a restraining order out against him. The two filed the order in 2008, alleging that the shooter “perpetrated acts of family violence” against them, alleging “extreme erratic behavior.” His ex-wife claimed while the two were married she was so concerned that he would harm her that she got rid of the guns in their home.

The gunman who targeted a Colorado Planned Parenthood in 2015 had police charges filed against him after his wife claimed he pushed her out a window. A man in Wausau, Wisconsin, allegedly shot and killed four people after beating his wife. The exact same pattern holds true for mass murders in places like Florence, South Carolina; San Bernardino, California; Kirkersville, Ohio; and Fort Lauderdale, Florida—and somehow we continue to be surprised when yet another killer is revealed to be a domestic abuser.

A 2013 report from the Violence Policy Center (VPC) claims that more than 1,600 women were murdered at the hands of a man, and statistics show that around 600 of those deaths were the result of a husband or boyfriend, one who may subsequently harm their kids. Cynthia Villegas’ husband murdered their four daughters after taking her life in 2016. A 2003 study published in the American Journal of Public Health showed just how grave the threat of violence is: If a woman’s partner keeps a gun in the home, she is 500 times more likely to die as a result of homicide.

We are bombarded with countless examples of this sobering reality, and yet we do little about it. When the Orlando shooter gunned down 49 people in a gay club last year, politicians didn’t highlight the need to stop domestic abusers before their violence escalates. The focus was solely on the gunman’s religion.

As the violence in Manchester so harrowingly reminds us, our continued silence on the violence women face every single day—even while doing something as innocent and silly as going to a sold-out concert for a former Disney channel star—has chilling costs. Saffie Rose Roussos, one of the few victims to be identified, was just eight years old. Her teachers describe Roussos as a “beautiful little girl” and “loved by everyone.” Prior to her untimely death, Georgina Callander tweeted at Grande, “So excited to see u tomorrow.” The 18-year-old, a self-described superfan, met the singer in 2015. They posed for a selfie.

If we care about the little girls who lost their lives on Monday night, we must create a world where young women can experience the joys of childhood without becoming yet another unfortunate statistic. We will never know what was going on in the Manchester shooter’s head, but who his victims are speak volumes.