Social media is buzzing about a now-deleted Facebook post from February that appears to have predicted a bomb threat that interrupted the final game of Manchester United’s season on Sunday.

Old Trafford was evacuated after law enforcement located a “suspicious package” in the stadium. Officials dealt with it in a controlled detonation, the BBC reported. It’s not yet clear whether the package actually contained a bomb.

Though the scare was short-lived, lasting just an hour and a half from discovery to detonation, the eerie social media prediction lived on and garnered the attention of hundreds. 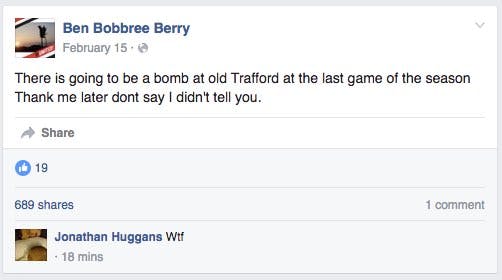 Berry’s premonition appears to be a hoax, however.

According to a follow-up Facebook post, Berry claims he edited the Feb. 15 post after Sunday’s events—a prank he soon regretted. He says he has “thousands of friend requests” and people accusing him of being “in the isis.”

Some people, who “just don’t know how to take my sence [sic] of humour,” have reported Berry to the police via Twitter.

Ben Bobbree Berry. #OldTrafford
Some will laugh, some will be outraged.
Regardless, many were fooled. pic.twitter.com/6yQnMt59Fd

@gmpolice might want to take a look at this re: Old Trafford – https://t.co/6BuPCFRuG4 Look for post on Feb 15.

Man U.  and Bournemouth will meet again to settle the interrupted game, but the rematch has yet to be scheduled.

“The game will definitely need to be played but there are logistical issues that need to be resolved,” the Premier League said in a statement, “However, they cannot even start to begin discussing them until the police have done what they need to do here [at Old Trafford].”