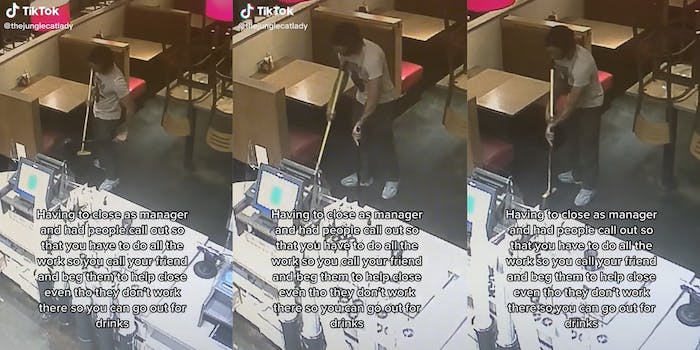 ‘Real mvp right there’: After everyone calls out, manager brings their friend in to help close the restaurant

In a viral TikTok video, a restaurant manager faces a problem that food service workers are likely all too familiar with: being left with a laundry list of work to perform single-handedly when your co-workers leave you high and dry.

However, in order to be able to close on time despite her co-workers calling out, user @thejunglecatlady brought her friend in to help.

The TikToker says via the video’s text overlay that she had plans to go out drinking with her friend after closing up the restaurant she works at. As the workload was far too much for a single person to handle, she enlisted the help of her friend in closing the restaurant —even though he didn’t work there.

While this sounds like something straight out of a sitcom, the manager shared security camera footage of their joint-closing endeavor. In the clip, her friend sweeps the floor of the restaurant.

“Having to close as manager and had people call out so that you have to do all the work so you call your friend and beg them to help close even tho they don’t work there so you can go out for drinks,” the text overlay reads.

Many viewers were smitten with her friend’s reaction, calling him a “true friend.”

“That’s sad …. We in bad times but it’s good he helped,” another said.

Several users hoped that she returned the favor by paying for drinks that evening, while some said that they too did the same thing for their pals.

“Hopefully you bought the drinks all night,” one viewer commented.

“U better buy drinks no cap or that friendship over inna thanos snap,” a second argued.

“My buddy called me and asked me to help him close up at taco bell and I went in and we closed even tho I never worked there,” a third shared.

“I took orders at jack one night drunk with my buddy it was easy af he had no bodies for a few hours,” another claimed.

Others said that her workplace probably wouldn’t be happy she brought him in because if he was injured it could potentially expose them to a litany of legal issues.

“He’s not eligible for workers’ compensation if he injured & u will be fired from his claim for his injuries or an accident happens. Hire workers,” one user argued.

In the summer of 2021, CNN reported that “restaurant workers are quitting in droves.” While the US labor shortage that occurred during the COVID-19 pandemic has hit many business verticals, the food service industry has perhaps taken the biggest hit and will likely continue to do so.

The National Restaurant Association predicts that this shortage will continue to affect companies well into 2023. “The hospitality industry was hit especially hard by the COVID-19 pandemic; with people leaving the workforce in droves both by force and voluntarily, there has been a record number of job vacancies impacting the industry,” the website of retail technology company National Computer Corporation reads.

The report continued, “Unfortunately, the National Restaurant Association’s State of the Industry Mid-Year Update predicts that the labor shortage in 2022 will continue throughout the year. In fact, three out of every four restaurant owners say that hiring and retaining employees is their biggest challenge.”

The Daily Dot has reached out to @thejunglecatlady via TikTok comment, as other means of contact were unavailable.