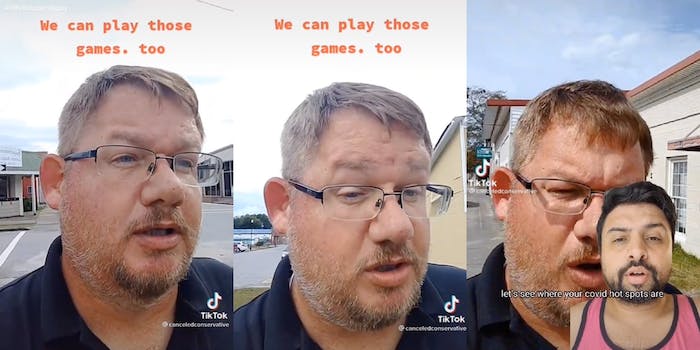 ‘Simply to prove a point’: Manager says he fired all of his vaccinated employees in viral TikTok

A man claiming to be a restaurant manager said on TikTok that he fired all of his vaccinated employees. The TikTok, which has since been deleted, caused controversy and confusion on the app.

Jodie Pendleton, known as @canceledconservative on TikTok, says he’s “a patriot” and “a person who loves the Constitution and this country.” His account appears to have been deleted as of Wednesday.

His original TikTok, saying he fired his employees, was made “simply to prove a point,” he said in a later video. The original TikTok showed Pendleton explaining that he had 138 employees across four restaurants. Of those 138 people, 46 were vaccinated, he said.

A federal mandate says businesses with over 100 employees must require employees to be vaccinated or tested weekly. According to Pendleton, his restaurant needed to have a staff of under 100 to skirt the vaccine guidelines.

“So what’d I do? I fired every motherfucking vaccinated employee we got,” he said in the video.

A TikTok sleuth, known as Danesh or @thatdaneshguy on the platform, exposed Pendleton’s restaurant as Paparoni’s Pizzeria and Grill in South Carolina. He then pointed out that it’s not legal for the manager to fire his employees for such a reason.

In a follow up TikTok that has since been deleted, Pendleton clarified that he was the district manager for the restaurant chain. While sporting a Trump beanie, he said the point he was trying to prove with the made-up story was “proven in a very hard way.”

“The left and their hypocrisies just fuckin’ blow my mind,” Pendleton said. “So I wanted to show them how it would feel for them and their first-class citizens to be terminated for making a choice. Because that’s really what’s fucking happening to the unvaccinated people.”

He claimed people who aren’t vaccinated are getting unfairly fired from them jobs “for making a choice.” Then he reiterated how much he loves America and the Constitution, saying he would never fire anyone for making “a personal choice” for their own body.

“I would never fire anyone for making a personal choice for making a political decision, even if that meant voting for that cock sucker that’s in office,” he said. “I wouldn’t do it. That would make me just like them.”

He added that he made the original TikTok to fire up “the left” and show them what it really means to lose a job and not be able to put food on the table or pay bills. It was meant to highlight the “stress and anxiety and everything that comes with that,” although it’s unclear if that purpose was achieved or if it just pissed off viewers.

Pendleton said he proved his point. Some viewers disagreed.

“700,000 people died in this country because people don’t want to be vaccinated and don’t want to wear masks. That’s not loving your country,” one viewer commented.

Another wrote, “For someone that claims to love the Constitution, you don’t seem to know much about what is and isn’t constitutional. What a shock.”

In another TikTok, Pendleton revealed that he was terminated from his job, which he worked at for four years, for posting the original TikTok and causing the harsh backlash.

The company’s Facebook page and Google page have received a slew of negative reviews and commentary since the video was posted.

“One of the most disgusting [restaurants] I’ve [come] across. Who fires employees who not only are protecting themselves, but also protecting you. the owner is a disgusting human being and a traitor to our country,” one person wrote on Facebook.

Someone else wrote on Google, “The owner does not believe in vaccines and has fired all staff that has been vaccinated against Covid. I feel very unsafe coming to eat at this restaurant with my family now.”

Pendleton described the restaurant chain’s owner as a fellow patriot “with really good views.” Then he said the two went together to the Jan. 6 insurrection at the U.S. capitol.

Pendleton urged viewers to support the store owner “lift that company up” by leaving positive reviews for it online.

After conceding that “it sucks” that he lost his job over the incident, Pendleton said he’s sure he’ll be fine. With two decades of general management experience, he’s confident he’ll bounce back and get another job.

“I’m sure there’s somebody out there looking for a person that cares the way I do and is qualified to run a business the way I am,” he said.

Neither Pendleton nor Paparoni’s Grill responded to the Daily Dot’s request for comment.